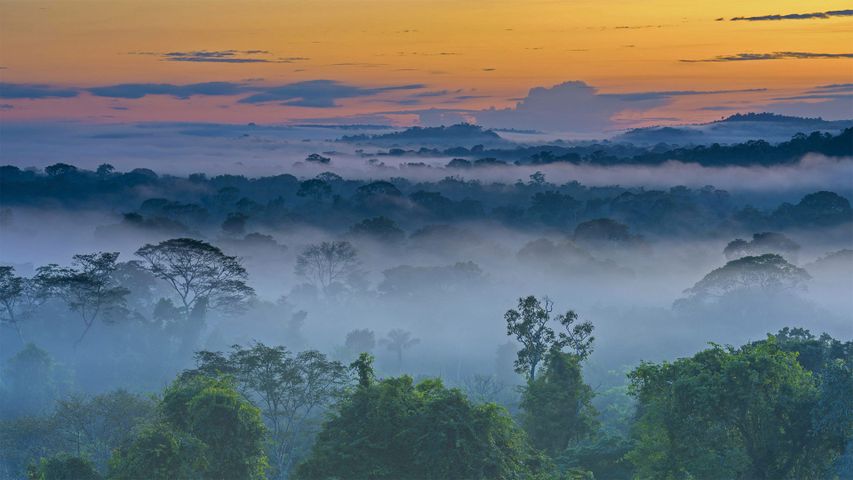 A misty morning in Brazil

The Amazon rainforest is big. Almost unimaginably big. To begin to grasp its immensity, consider these numbers: The Amazon rainforest covers about 2% of the world's surface area, nearly 2.1 million square miles across South America, mostly (nearly 60%) in the country you see here, Brazil. It's an area that accounts for over half the Earth's remaining rainforests. The breadth of biodiversity is incomparable—nearly 16,000 different tree species, 40,000 species of other plants, 2.5 million insect species, and over 2,000 different types of birds and mammals. Incredibly, perhaps a tenth of the planet's known species call the Amazon home, many of which have not even been identified.

Yet, despite its vastness and ecological riches, the Amazon and the world's rainforests in general are in jeopardy, with large swaths of these precious environments being stripped and spoiled every day. Recent analysis has revealed some ominous warning signs that the Amazon rainforest, long known as the 'Lungs of the World,' is now spewing out as much greenhouse gas as it can store because of rampant deforestation here. If true, this is a bad sign in our battle against climate change. Hopefully, these warnings will raise awareness about the importance of rainforests, and the vital 'carbon sink' role they play in creating and maintaining the air we breathe. The more we learn about rainforests, the more we appreciate how our own future, and the future of our planet, hinges upon their health.