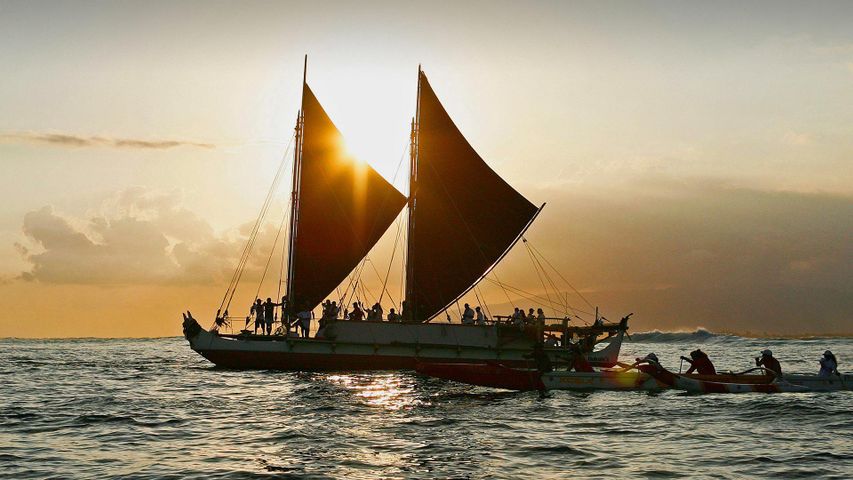 An ancient sailing tradition takes to the water

During Asian American and Pacific Islander Heritage Month, we're turning our attention to this vessel setting sail from Honolulu. It looks like a sailboat at sunset, accompanied by a group of rowers. But this is actually the Hōkūle'a, a replica of a traditional Polynesian voyaging canoe, as it departs in May 2014 for a three-year 'Mālama Honua' voyage to circumnavigate the world. The Polynesian Voyaging Society, which organizes the expeditions of the Hōkūle'a, explains that 'Mālama Honua' means to 'care for our Island Earth.' As they sail around the world, they're discovering and sharing local and Indigenous wisdom in a bid to help overcome the world's current challenges.

The Hōkūle'a is probably best known for its 1976 maiden voyage, when it sailed from Hawaii to Tahiti without the use of charts or instruments. Instead, the crew used traditional Polynesian voyaging techniques such as star mapping and tracking cloud formations, wave patterns, and the flights of birds. Why go to so much trouble? The sailors wanted to prove that their ancestors discovered Hawaii during purposeful trips in the Pacific, instead of happening on the islands by chance while aimlessly drifting with the currents. The Hōkūle'a continues to sail today, spreading the culture of Hawaiians and other Polynesians—doing the work and sharing the wisdom of Mālama Honua.