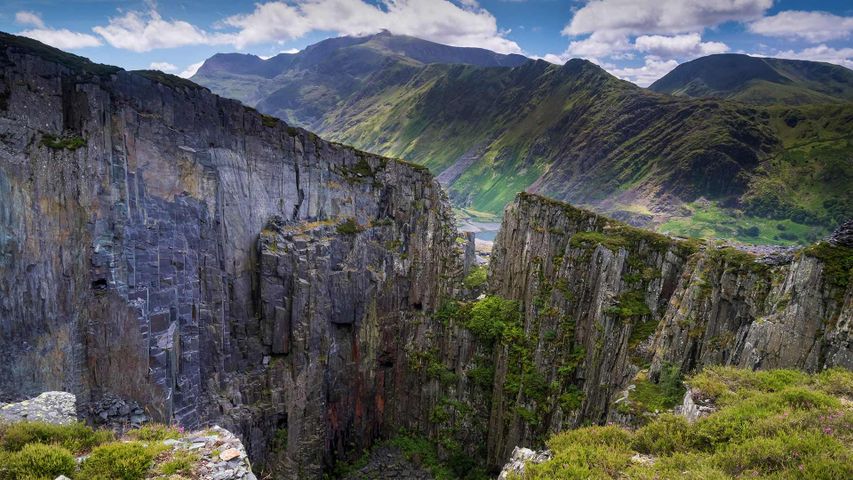 This dramatic view brings together two Welsh icons. In the distance sits the country’s highest mountain, Snowdon, while the towering walls of slate in the foreground nod to an industry which has reshaped the landscape here over the centuries. This is the former Dinorwic quarry in the county of Gwynedd, once the second-largest slate quarry in the world after nearby Penrhyn. Slate was first extracted here by the Romans but the process really gathered steam during the industrial revolution, when it became known as the industry that ‘roofed the world’.

At its height in the late 19th century, thousands of men were employed at Dinorwic and the Welsh slate industry as a whole extracted about 485,000 tonnes a year. Slate quarrying chiselled its way into the landscape and communities grew up around it. But in 1969, Dinorwic closed, a victim of falling demand and cheaper imports. Now Dinorwic is home to the National Slate Museum of Wales, thanks in part to the efforts of the quarry’s former chief engineer, Hugh Richard Jones, who saved the 51ft (15.4m)-wide waterwheel and other equipment from being sold off.

Welsh slate has a worldwide reputation for quality and was used in the construction of Westminster Hall in London, Copenhagen City Hall and the Royal Exhibition Building in Melbourne, Australia. An important part of Welsh industrial and cultural heritage, this slate landscape has been nominated by the UK government for Unesco World Heritage status.