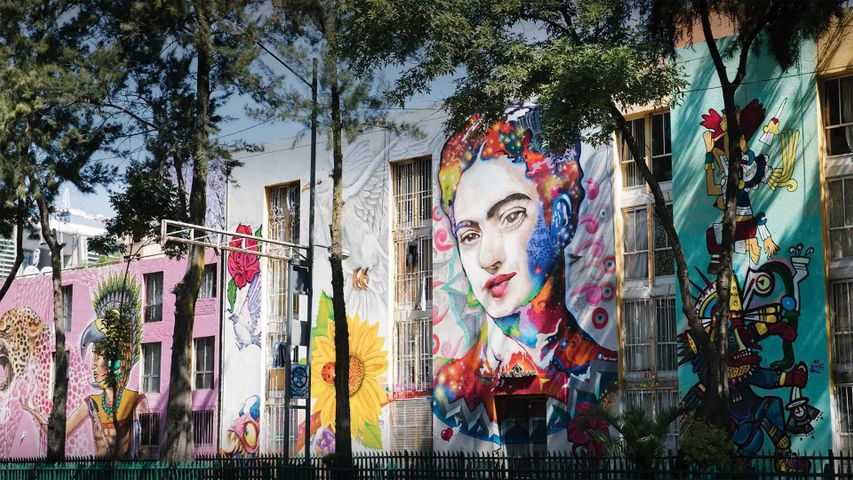 We’re celebrating International Women’s Day with this colourful mural in Mexico City depicting the influential artist and feminist icon, Frida Kahlo. Known for her distinctive self-portraits, Kahlo defied gender stereotypes and used her paintings to explore themes of pain, her Mexican identity and the female experience. Born in 1907, she survived polio at the age of six and had dreamed of becoming a doctor until a bus accident at 18 left her with severe leg and spinal injuries. She began painting as she recovered, after her parents had a special easel made and installed a mirror above her bed. It put her on a new path that would eventually see her celebrated as one of Mexico’s greatest artists.

Of her 150 paintings, 55 are self-portraits, including The Broken Column, Self-Portrait With Thorn Necklace and Hummingbird and the famous Self-Portrait in A Velvet Dress. While many of her paintings use dream-like images to represent her physical body and life experiences, she disagreed with those who described her as a surrealist, saying: “I never painted dreams; I only ever painted my reality.”

In her lifetime, she was also known for her tempestuous marriage to the muralist Diego Rivera, as well as her communist ideals. Her fame as an artist continued to grow after her death in 1954 and she is now one of the most widely recognised artists of the 20th century. The popularity of her work endures, as does her story of courage and determination in the face of adversity.