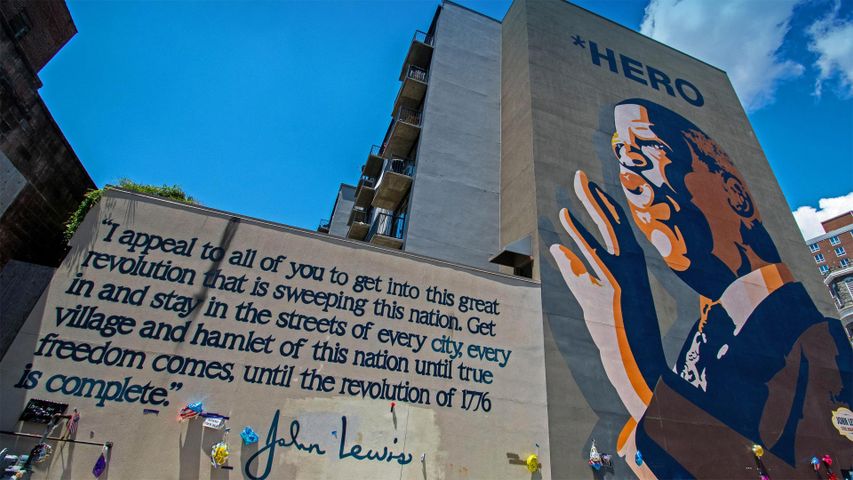 A hero for the 21st century

Towering above Atlanta's Sweet Auburn district is this 65-foot-high mural of John Lewis, the civil rights icon. What better way to celebrate Black History Month than to honor Lewis, a son of sharecroppers who carried the struggles of the civil rights movement from the Jim Crow South to the halls of Congress? An Alabama native, Lewis moved to Atlanta in 1963. He was already famous and would become even more so for leading marches, protests, and sit-ins throughout the South. Beaten by police, the KKK, and angry mobs, Lewis never wavered from his belief in nonviolent protest. He famously fought with his voice and peaceful actions, never his fists.

When this mural was dedicated in 2012, Lewis joined muralist Sean Schwab in adding the final touch to the work of art. He painted the dot over the 'I' in his last name and reflected on his life's work as an activist. 'Growing up in a little town in southeast Alabama, I never would have dreamed that there would be a mural of me on the side of a building in Atlanta that is so big it could be seen from the highway,' he said. Lewis died on July 17, 2020. Other murals of Lewis have since gone up in other cities, including Rochester, New York, and Birmingham, Alabama.