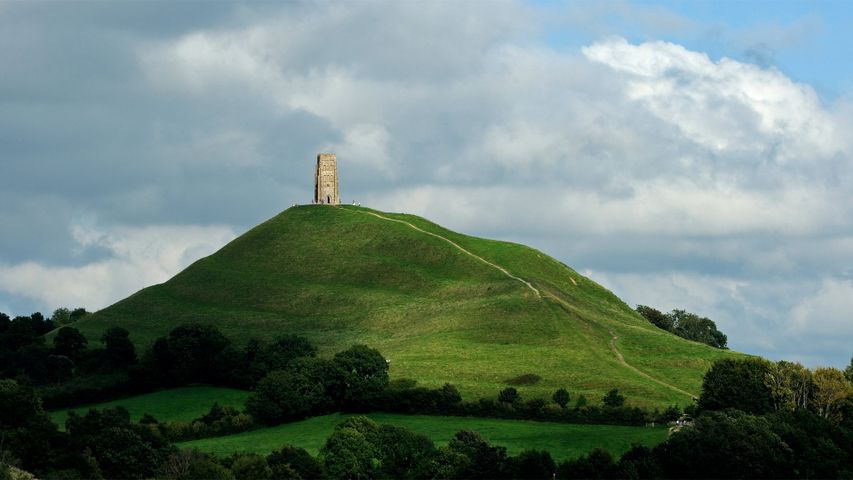 Greetings from Glastonbury Tor and St. Michael's Tower in Somerset county of southwest England. The tor (a Celtic word for an isolated hill) is often mentioned in Celtic mythology, and some believe it to be the site of Avalon, a mythical island central to legends of King Arthur. Glastonbury Tor has other enduring spiritual associations as well, particularly to various neopagan beliefs. Archaeological evidence suggests that several buildings have been constructed at the top of the hill over many centuries, but all that remains today is the roofless tower of St. Michael’s Church, built in the 1300s.Glastonbury Tor may dominate the surrounding coastal plain, but it isn't visible from the nearby Glastonbury Festival, which begins today and runs through Sunday, June 30. Since 1970, music fans have turned the Glastonbury area into an outdoor bacchanalian summer retreat as they converge on the area to watch some of the world's most popular pop and rock musicians perform live at the festival. Most summers, the farmland around the village of Pilton - including festival-creator Michael Eavis' Worthy Farm - is transformed into the largest greenfield festival in the world, with more than 100,000 people attending and camping in the area. In an homage to the area’s most enduring feature, the festival's official artwork this year is a representation of Glastonbury Tor and its tower under a full moon, surrounded by red clouds.