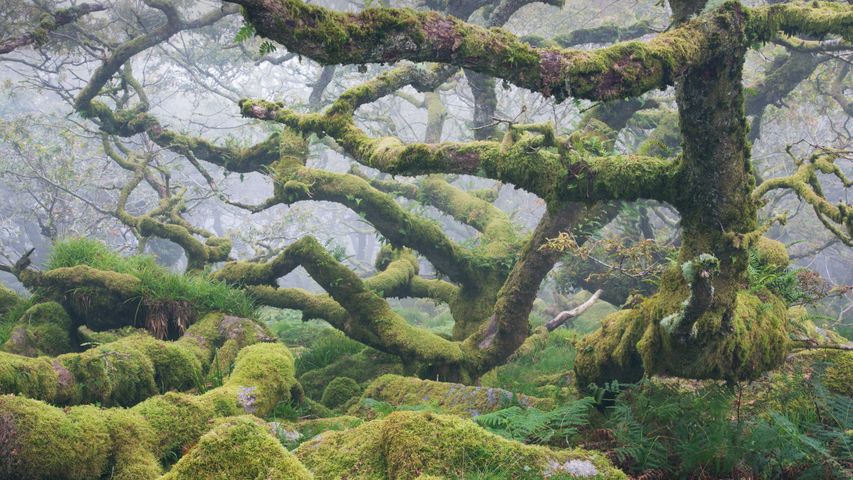 To celebrate National Tree Week, we’re on Dartmoor in Devon, where the twisted oak branches of Wistman’s Wood harbour some of the rarest plant life found in the UK. This ancient site is one of Britain’s highest oakwoods and is an example of a temperate rainforest, a rare habitat found along the UK’s Atlantic coastline. The mild and damp conditions here in this bit of south-west England make it ideal for a number of scarce lichen, mosses and fungi. The wood is home to Horsehair lichen (Bryoria smithii) found at only two sites in Britain.

Here on the slopes of the West Dart Valley, Wistman’s Wood sits at an altitude of between 1,247ft (380m) and 1,427ft (435m) above sea level and the floor is littered with exposed granite boulders. The most common type of trees, as seen in our homepage image, are moss and lichen-covered dwarf oaks, which twist between rocks and along the forest floor in places. It is thought that Wistman’s Wood is the ancestor of an ancient forest that covered much of Dartmoor around 7000 BCE. The oldest oaks here are thought to be between 400 and 500 years old.

Owned by the Duchy of Cornwall, the wood is managed by Natural England and is both a Site of Special Scientific Interest and a national nature reserve. Given its rather eerie appearance, it is no surprise that there are various ghost stories linked to it, including the hellhounds of a legendary Wild Hunt, known in the local Devonshire dialect as Yeth or Wisht Hounds. At the very least, it has a healthy population of venomous adders, so tread carefully.