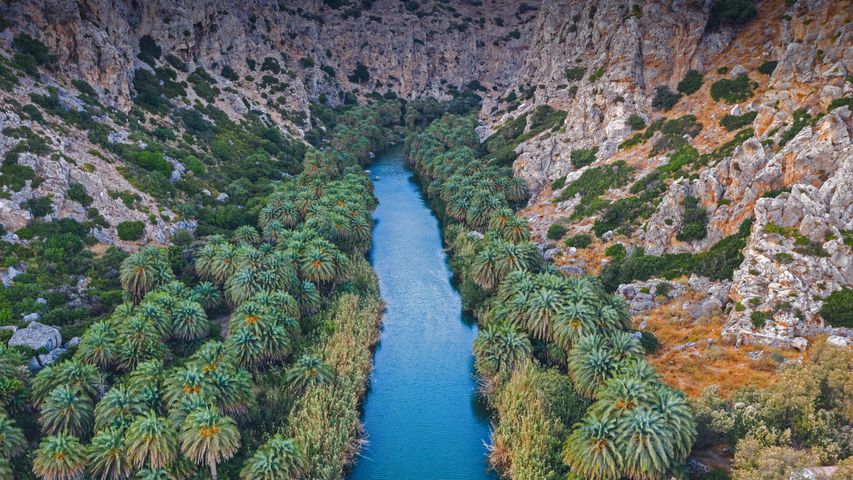 A gorge-ous place to drop in. Prevali Gorge

Trojan War-era rest stop? Local legend has it that this striking and historic location in southern Crete was a stopover on Odysseus’s long return to Ithica. Whatever credence you give to Homeric tales of island hopping, there’s no denying the appeal of the palm-lined Preveli Gorge or the enchanting beach it pours out to. Preveli Beach, just out of the frame of this image, was a favourite spot for hippie travellers in the ‘60s and ‘70s and remains an idyllic tourist destination today.

Like most of the ancient, well-trodden Mediterranean islands, Crete—the largest of the many Greek isles—has a rich, epoch-spanning history. Here on Crete’s southern coast, Preveli Gorge is home to an influential monastery with two building complexes: the Lower (Kato) Monastery of Saint John the Baptist and the Rear (Pisso) Monastery of Saint John the Theologian. The holy sites date back at least as far as the 16th century, and possibly had origins as far back as the 10th century.

During the long occupation of Crete by the Ottoman Empire, Preveli Monastery was a centre of rebellion and patriotism, with monks often serving as leaders and warriors in the many revolts against the occupiers. After more than 250 years, Crete finally won its freedom and joined Greece in 1913. The monastery would again find itself at the centre of world events when it provided shelter and supplies to Allied soldiers fighting German occupiers during World War II.