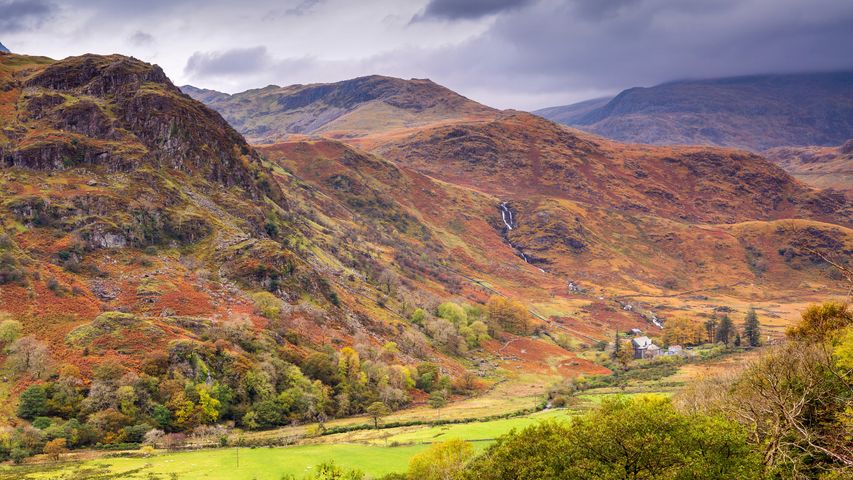 In the foothills of Snowdon. Nant Gwynant valley, Snowdonia

Nestled in the foothills of Snowdon, Nant Gwynant is one of the most stunning valleys in Wales. Home to two peaceful lakes - Llyn Dinas and Llyn Gwynant - as well as woodlands, waterfalls and ancient ruins, this area is steeped in myths. A few miles downriver is the rocky hillock of Dinas Emrys where, legend has it, that a 5th century Celtic king released two fighting dragons, a red and a white from beneath the hill. The red one won, returned to his lair and became the national symbol of Wales.

In the centre of the image, at the bottom of a pipeline carrying water from Llyn Llydaw, 1,050ft (320m) above, is the Cwm Dyli hydro-electric power station, known locally as the ‘chapel in the valley’. Built in 1905, it is Britain’s oldest power station and still supplies electricity to the National Grid. Its 1.2-mile pipeline also appeared in the 1999 Bond film The World Is Not Enough.

For walkers in this area there are panoramic views to enjoy and plenty of wildlife and historic buildings to spot, including Hafod Lwyfog, built in the 1540s and Victorian-era Craflwyn Hall, both owned by the National Trust. The start of the challenging Watkin Path also begins in Nant Gwynant, one of six main routes to the summit of Yr Wyddfa (Snowdon) and the first designated footpath in Britain, opened in 1892.