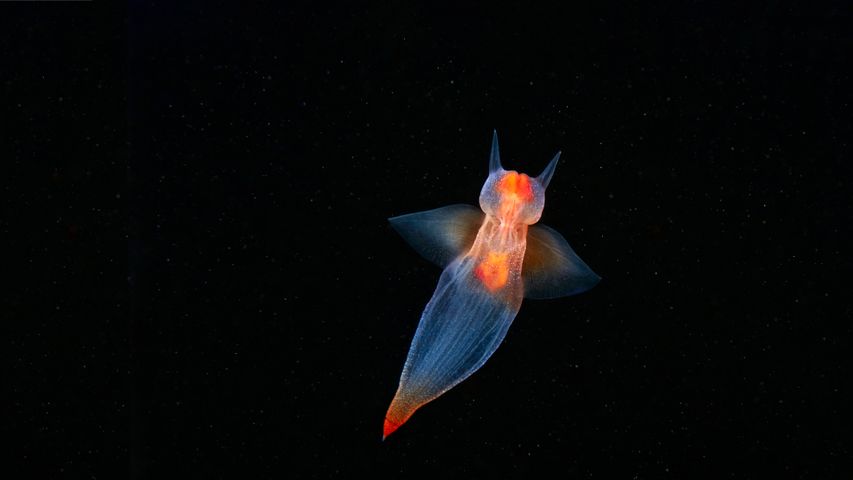 Swimming into view like an oceanic Halloween specter, today’s ‘sea angel’ is one of about 3,000 sea slug species. Sea slugs can be found in all the oceans and seas of the world. Scientifically known as nudibranchs, sea slugs are mollusks and today is the day the world celebrates them. What, you didn’t know? Perhaps that’s because technically it’s the birthday of the premiere authority on all things related to sea slugs, Terry Gosliner. Gosliner has identified nearly half of the known sea slug species in the world, has written 150 scientific papers about them, and has personally named around 350 individual species. ‘Everything about them just piques the imagination,’ he says. So, we’re saying ‘Happy Birthday, Terry’ by taking a moment to examine the sea angel.

Sea angels are classified into six different families, and they’re all remarkably small, with the largest being only about 3 inches long. They can be found in arctic waters under the ice to more tropical areas and all points in between. Gelatinous in nature, they’re also mostly see-through. Do you see those ‘wings’ there in the photo? They allow the sea angel to ‘fly’ around at about 0.22 mph, which may not seem very fast, but it’s about twice as fast as their most common prey, the sea butterfly. Belying their name, these angels are ambush predators that actively attack and extract sea butterflies (technically sea snails) from their shells. Some species of sea angels emit a toxin to keep predators away, which has caused other sea creatures to carry them around as a sort of ‘underwater pepper spray’ to fend off their own predators. Given this, maybe ‘sea guardian angel’ would be a more fitting name. Someone call Terry.