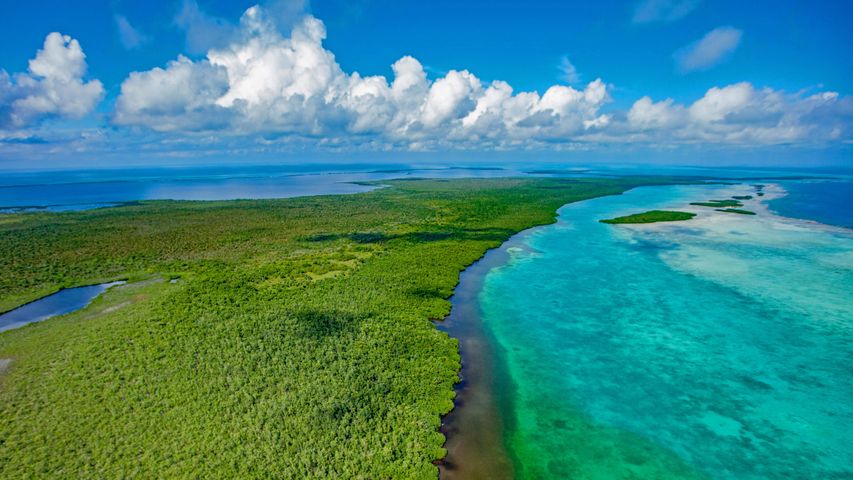 One of the greatest marvels of the marine world, the Belize Barrier Reef runs 305 kilometres along the Central American country's Caribbean coast. It's part of the larger Mesoamerican Barrier Reef System that runs from Mexico's Yucatan Peninsula to Honduras and is the second largest reef in the world behind the Great Barrier Reef in Australia. Declared a UNESCO World Heritage Site in 1996, it's remained relatively healthy even as many of the planet's reefs are threatened by climate change.

Featured here is a mangrove forest on Lighthouse Reef, one of three major atolls (above-water sections of reef that form ringlike, often lush island chains) in the reef system. It's the most visited of the atolls for one reason: Near its centre is the Great Blue Hole, a marine sinkhole that's 318 metres across, 124 metres deep, and a bucket-list destination for serious scuba divers. Now protected within the Blue Hole Natural Monument, the hole was made famous when oceanographer Jacques Cousteau charted its depths in 1971.

The barrier reef is by far Belize's most popular tourist attraction, a destination for diving and fishing as well as sightseeing. One of the most biodiverse places in the world, the system includes more than 400 cays or islands, mangrove forests, coastal lagoons, and estuaries, and is the only place in the Western Hemisphere to find coral atolls. Think of it as a taste of the South Pacific, but a lot closer to home.

Polar bear at the edge of Hudson Bay, Manitoba