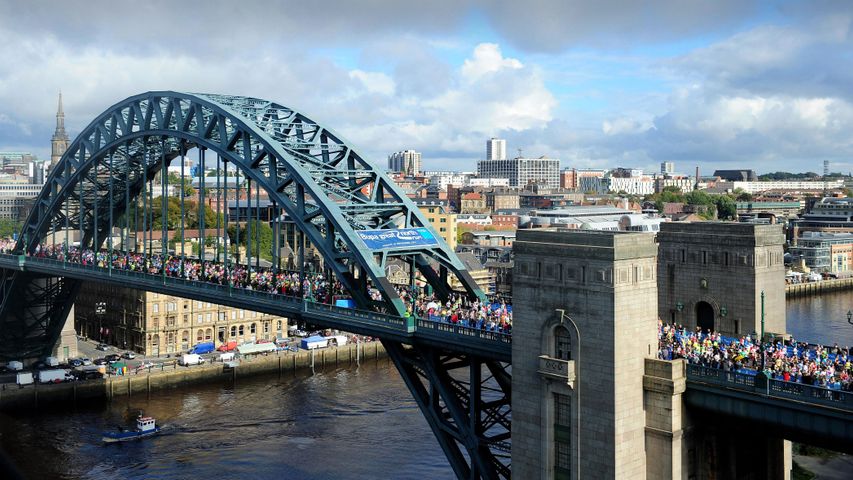 In the running. Great North Run

This towering steel and granite structure linking Newcastle-upon-Tyne and Gateshead is the Tyne Bridge, an icon of north-east England and a photogenic backdrop to the world’s biggest half marathon, the Great North Run. This year's junior and mini Great North Run were postponed following the death of Queen Elizabeth II, but the main event is going ahead, although organisers say some elements will be more subdued as a mark of respect.

There have been bridges across the Tyne since Roman times and this one, which carries around 70,000 vehicles a day into and out of Newcastle, is one of seven that exist today. Built for the new age of the motorised vehicle, it was constructed in the 1920s by local workers using shipbuilding techniques, welding together rivets and panels at great heights without safety equipment. A major engineering feat of the early 20th Century, it was a scaled-down version of a similar design prepared for Sydney Harbour Bridge, which had the same engineering firm and was built around the same time. It was opened in October 1928 by King George V, the Queen's grandfather, who was the first to drive across in his Ascot Landau carriage.

These days, the bridge is Grade II listed and efforts are underway to find funding to repair and renovate it before its centenary in 2028. With its dramatic design, it is a defining symbol of industrial pride on Tyneside and an eye-catching backdrop to the Great North Run, as roughly 60,000 runners will cross it near the start of the city-to-coast race.

Purple and pink heather on heathland near Studland, Dorset