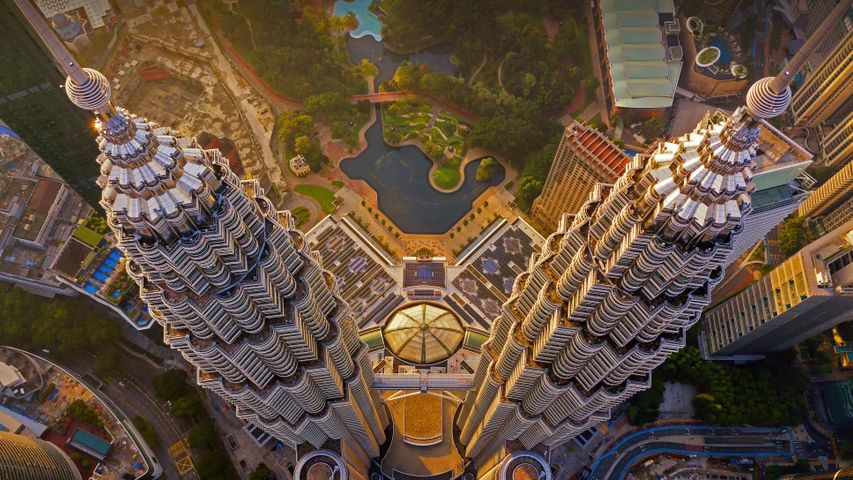 The Petronas Twin Towers are an iconic fixture of the skyline in the Malaysian capital city of Kuala Lumpur. The 88-storey, 1,483ft (452m) cylindrical towers were the tallest buildings in the world when they were completed in 1998, until 2004 when Taiwan's Taipei 101 topped them by almost 200ft (61m). Still the tallest twin skyscrapers in the world, they're picture perfect on Skyscraper Day, set aside to appreciate such engineering and architectural feats.

The Petronas Towers, named after Malaysia's state-owned oil and gas company, were designed by the late Argentine-American architect Cesar Pelli, who incorporated motifs of Islamic art into his design. It remains his masterpiece, and a true standout in a country full of skyscrapers. One of the most unique features can be seen here: a two-level skybridge that connects the towers at the 41st and 42nd floors. The bridge is not anchored to the main structure, but freely slides into each tower to accommodate any swaying caused by wind.

The prevalence of supertall structures in Asia isn't a coincidence. Skyscrapers spring up where populations are high, land is in short supply, and economies flourish. Plus, for an up-and-coming city, nothing says you've arrived like a gleaming skyscraper - or a pair of them. And why stop there? The Petronas Towers are no longer the tallest kid on the block in Malaysia, with the arrival of 2,227ft (679m) Merdeka 118, completed this year as the second-highest building in the world.