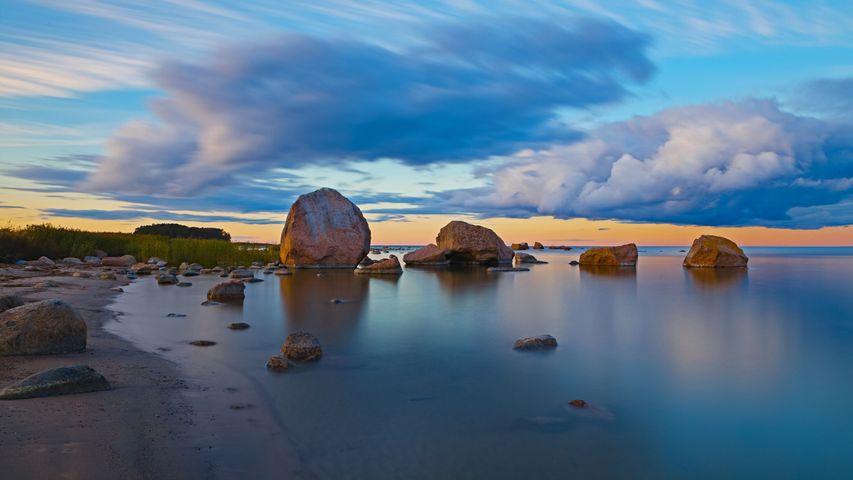 The sea that acts like a lake. Baltic Sea, Estonia

The Baltic Sea in northeast Europe is a peculiar body of water, possessing the characteristics of seas, lakes, and estuaries. Strictly speaking, it is in fact a sea and thus appropriately named, joined to the Atlantic Ocean through three straits in Denmark: the Oresund, Great Belt, and Little Belt. Technically, the Baltic is classified as a brackish sea, meaning it is not entirely fresh and not entirely saline. The Baltic Sea isn’t landlocked, but it does border many countries, including Russia, Finland, Sweden, Denmark, Germany, Poland, Lithuania, Latvia, and Estonia—and it’s the Estonian coast featured in today’s image.

Like a lake, the Baltic is relatively shallow with an average depth of 45 metres. Its salinity is so low, it nearly qualifies as freshwater. That’s because hundreds of rivers empty into the sea, and more fresh water falls on the sea in the form of rain and snow than evaporates. The Baltic can also be described as a giant estuary, into which flow dozens of rivers. Sailors favour the Baltic because there is very little current and tide to contend with, and even when surface winds pick up, the seas remain relatively calm. Easy to navigate, gateway to so many lands--the Baltic has been integral to trade and commerce, and inevitable conflict, in the region for centuries. It has been known by many names, proof the Baltic is a true meeting place.

Blurred view of ride at the Canadian National Exhibition, Toronto