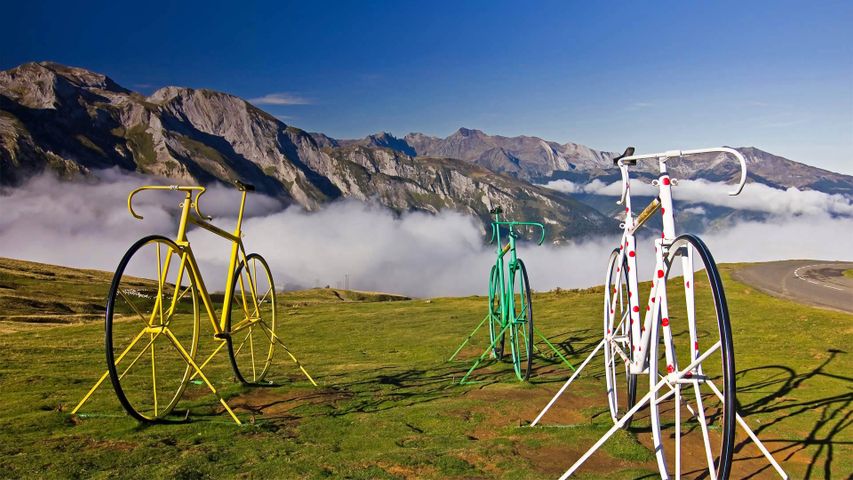 Today we're high in the French Pyrenees at the Col D’Aubisque, a beautiful mountain pass topping out at 1,700 metres above sea level. It has special significance to riders and followers of the Tour de France, which starts today in Nice: The Col D’Aubisque is one of the most famous climbs on the 23-day Tour (21 days of racing), with riders clocking around 3,500 kilometres overall. The road up the pass has grades in either direction that can tilt past 10 per cent. This epic mountain stage was first added to the 1910 race and it's since appeared in more than half the annual Tours, though not this year as it happens.

Just off to the side of the road at the pass, these three giant bicycle sculptures are painted in colours that correspond to the colourful jerseys worn by Tour de France riders. The yellow bike represents the overall time leader’s yellow jersey; the green jersey is for the leader in stage points; and the white polka-dot jersey is for the best climber, or the 'King of the Mountains.' It’s an apt name for anyone who conquers the Col D’Aubisque, which is an 'Hors Categorie' climb, meaning it is beyond categorization. In other words, it's really, really, hard. While climbing the Col in 1910, French rider Octave Lapize famously yelled at Tour officials, “You are murderers!” Today, motorists can drive over the pass without breaking a sweat, but cyclists still have their work cut out for them.

Blurred view of ride at the Canadian National Exhibition, Toronto