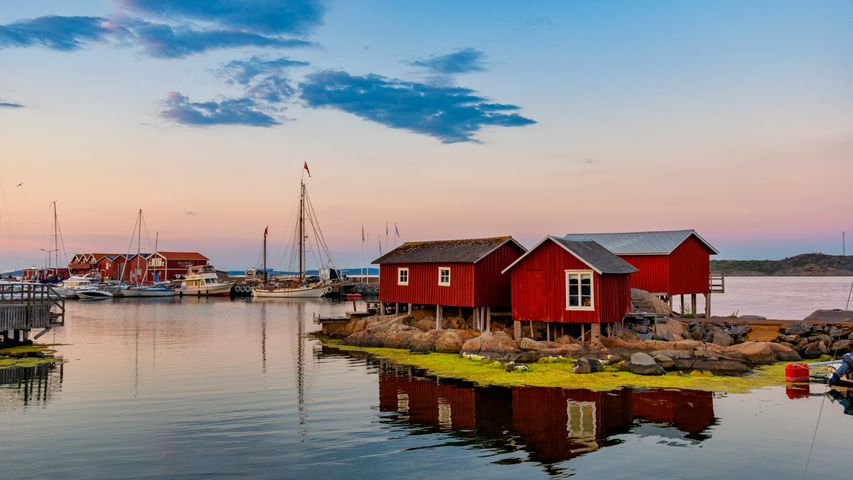 We’re in Sweden and cracking open this year’s surströmming harvest to enjoy its putrid wonder. Surströmming is Baltic herring that’s been caught in April and May, then lightly salted and allowed to ferment. Beginning in the 1940s, a royal ordinance forbade the selling of Surströmming before the third Thursday in August to prevent incompletely fermented fish from being sold. The ordinance is no longer in the books, but the tradition holds.

Swedes indulge in pickled herring from bloated cans that most insist should be opened outside and preferably underwater. That’s the recommended way to alleviate the stench from what some call ‘the world’s worst smelling food.’ You may have seen popular ‘challenge’ videos of people trying to brave the experience and failing miserably. That’s part of the fun, even if those videos are not the best representations of a true surströmming feast.

In today’s photo, we’re visiting a small fishing village on the island of Källö-Knippla in Gothenburg’s northern archipelago. People there today might enjoy some surströmming on top of tunnbröd flatbread. It’s common to then cover it in red onions, sour cream, and dill and then wash it all down with a shot of booze, a beer, or even milk. The taste is said to be very sharp, savoury, and even acidic. That is if you can keep it down. One food critic famously said that ‘the biggest challenge when eating surströmming is to vomit only after the first bite, as opposed to before.’