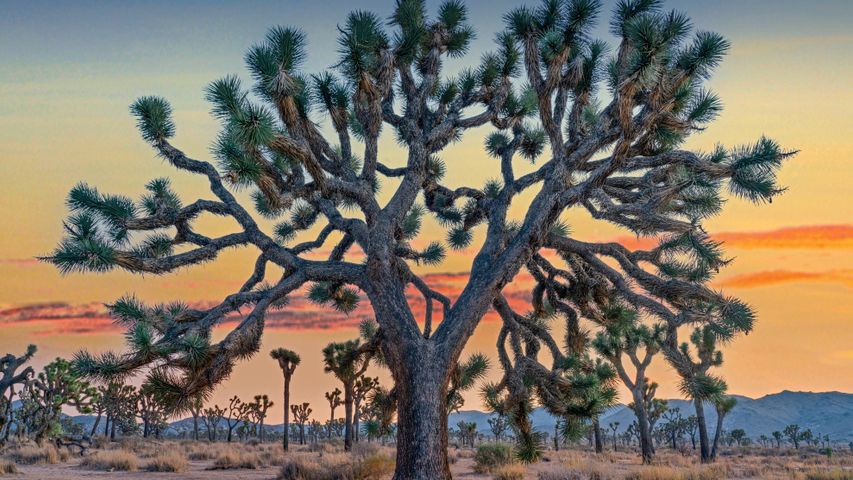 These immensely photogenic and relatable trees, their shaggy, sinewy limbs thrust upward into the pale light of the desert sky, are the main reason people come here to California’s Joshua Tree National Park. Joshua Tree was declared a national monument on August 10, 1936, before being designated a national park in 1994. Perhaps no other national park is so completely defined by a single feature, be it a plant or wildlife or natural formation. While Joshua Tree National Park contains other wonders, this tree that looks drawn by Dr. Seuss is what visitors come to celebrate.

The park (and the town of the same name) could also be called the hippest national park in the country, owing to its proximity to Los Angeles, and the Insta-worthy, charismatic flora that have helped make JT a darling on social media. Van lifers, artists, celebrities, and other creative bohemians have fuelled a boom in tourism, not just to the park itself, but to the surrounding towns, like Pioneertown. The kitschy outpost served as an old Hollywood set and is now a centre of nightlife in the area. Pappy & Harriet’s Pioneertown Palace serves artisanal cocktails with its barbecue and features live music, sometimes from the likes of Paul McCartney, Robert Plant, and Patti Smith. And if you can’t find an elderflower martini in Joshua Tree, then Palm Springs and Coachella are a short drive away.

But for those going purely for the nature—the hikers, rock climbers, campers, and stargazers—the 3,100-square-kilometre park is no less a marvel. Two deserts, the high-elevation Mojave and the low-elevation Colorado, merge here, each with its own ecosystem. The Joshua tree itself grows only on the Mojave side, at elevations between 400 and 1,800 metres. Most of the world’s Joshua trees are found here. A variety of yucca, Joshua trees live to be 500 and 1,000 years old with roots as deep as 10 metres. Most believe their name was first concocted by Mormon pioneers who likened their branches to the oustretched arms of the biblical Joshua. It proved catchier than its botanical name, Yucca brevifolia. And as any influencer worth their followers will tell you, it makes for a much more memorable hashtag.