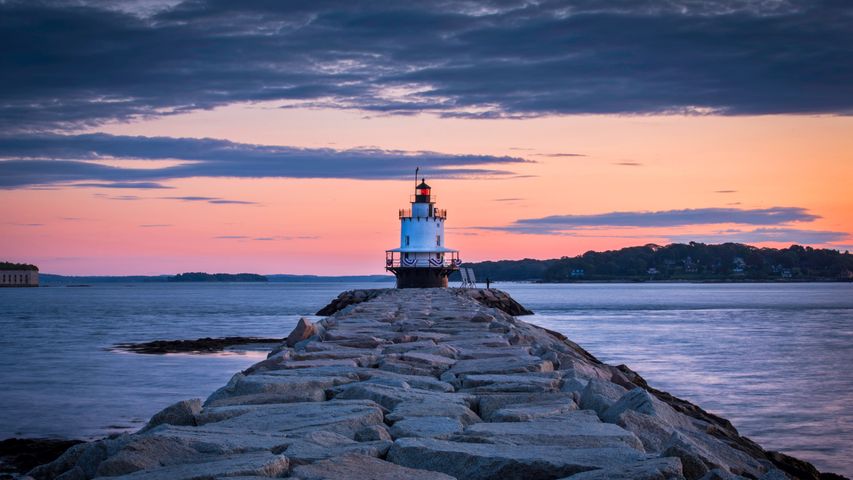 It’s Lighthouse Day in the United States, so let’s stroll over to Spring Point Ledge Light on the breakwater next to Southern Maine Community College in South Portland, Maine. Lighthouse enthusiasts will recognise this as a caisson-style light station, meaning it’s a lighthouse built on top of a water-tight chamber called a caisson. In the US, caisson lighthouses became popularly known as ‘bug lights,’ and after the invention of the internal combustion engine, many people started calling them ‘sparkplug lighthouses.’ Most caisson lighthouses are offshore or on dangerously exposed sites, but this is the only sparkplug lighthouse in the country that visitors can walk to.

Spring Point Ledge Light warns boats approaching Portland Harbor of the hazardous ledge that it’s named for. This underwater ridge reaches out into the shipping channel and was the cause of many shipwrecks in the late 19th century, when the harbour was one of the busiest on the entire east coast. Built by the United States Army Corps of Engineers, Spring Point Ledge Light has been a reliable guardian of Casco Bay and Portland Harbor since 1897. The brick and cast-iron lighthouse earned its spot on the National Historic Register in 1988. In May 2022, people celebrated the 125th anniversary of the first time the lamp was lit, back when it guided schooners and hulking steamships safely to shore.