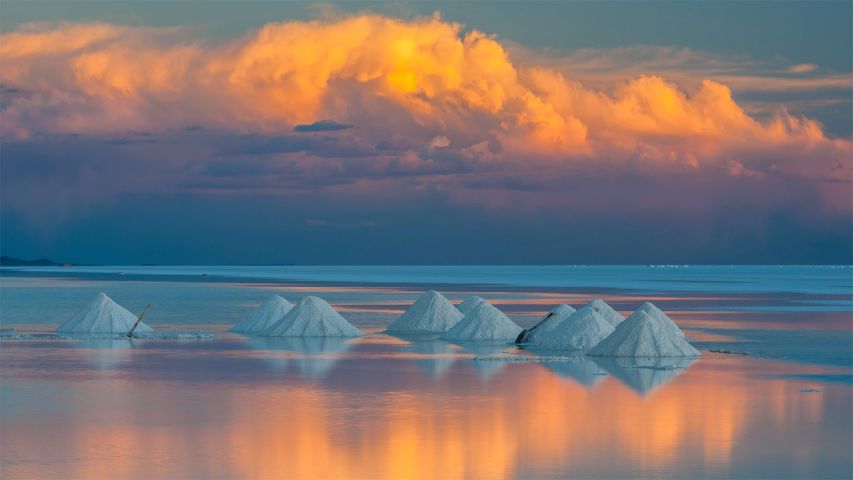 This shimmering white expanse could easily be mistaken for Antarctica. But what we’re looking at isn’t snow and ice – it’s a surreal landscape of endless salt high in the Andes of southwest Bolivia. Located at a lofty altitude of about 12,000 feet above sea level, Salar de Uyuni is the world’s largest salt flat (or salt pan), spanning just over 4,000 square miles. It was formed when prehistoric lakes dried up over centuries, leaving behind a desert of bright white salt that can be seen from space. During the months from December to April, a thin layer of water covering the salt transforms the area into a giant mirror that reflects the beautiful Bolivian skies. If you’re driving across the surface at such times, it can appear as though you are navigating through a highway of clouds.

Salar de Uyuni contains more than just a pinch of salt; there's an estimated 11 billion tons of it here, with about 25,000 tons extracted annually. Local salt gatherers – ’saleros’ – scoop the raw mineral into mounds to let it dry under the sun before it's transported to the nearby village of Colchani, where it's processed and turned into table salt, which is then sold in Bolivia and other countries. But the real treasure is buried beneath the salt crust. Just below the crystalline surface lies the world's largest untapped lithium reserve that could one day power the batteries in our smartphones, laptops, and electric cars.