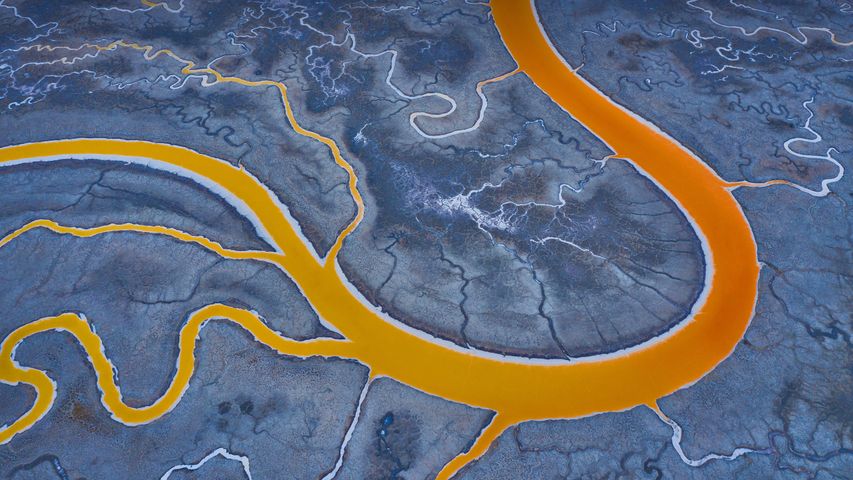 You might be wondering where the volcano is in today’s photo, but that’s not lava. These are salt evaporation ponds in San Francisco Bay. If you fly over this part of the United States, you’ll notice bright orange, green, blue and even magenta pools that are part of the famous salt ponds. The vibrant colours are determined by brine shrimp, algae and other microorganisms and their responses to different levels of salt. This orange results from about a mid-level saline concentration and the presence of tiny brine shrimp in the water. Green indicates low levels of salt, while pink or red are signs of high salt content in an algae-rich pond.

When Spanish explorers and missionaries arrived in the area in the late 18th century, members of the Indigenous Ohlone people were already extracting salt from the naturally occurring ponds. The California Gold Rush (1848–1855) brought waves of settlers to the region, and salt became one of San Francisco’s largest industries. Roughly 80% of the wetland was eventually lost to salt mining, landfill or other industrial alteration. But since 2003, many of these tidal flats have been acquired by federal and state agencies as well as private foundations to be restored to their original state. The restoration process will take decades, but even as the wetlands are being restored, about half a million tonnes of sea salt are harvested from the ponds every year.