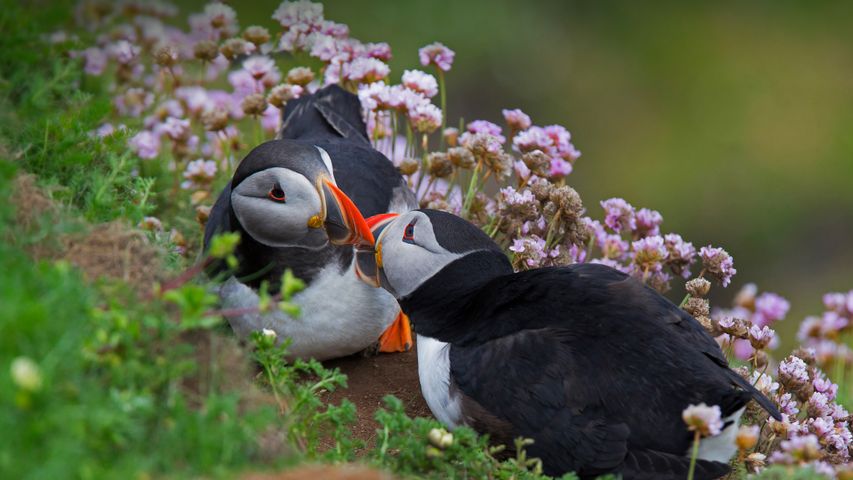 Atlantic puffins, also called common puffins, are the only one of three species of puffin native to the Atlantic. They inhabit the far north, in Newfoundland, Labrador, Greenland, Norway and Iceland. They’re expert flyers, swimmers and divers, spending autumn and winter on the open ocean fishing. They can fly as fast as 80 kilometres per hour, and dive as deep as 60 metres for their food. Come spring and summer, adult puffins return to shore to breed and raise their young in cliffside colonies. A female lays a single egg, but both parents take turns incubating their chick, and later feeding it. Puffin couples often reunite each year at the same nesting site. How they find the exact same spot is a mystery.

These two puffins are enjoying the warm season in the far north of the Shetland Islands in Scotland. In winter, their beaks turn grey, but come spring their colours return. Just in time for mating season – probably not a coincidence, scientists have concluded. With brightly coloured beaks, the billing begins. Billing is an endearing form of social behaviour seen in today’s image, in which puffins playfully tap each other’s beaks by swinging their heads from side to side. The behaviour is generally limited to mated pairs, but sometimes puffins bill with neighbours as well. Whether you call it billing or kissing, it seems to be the way puffins show they care.