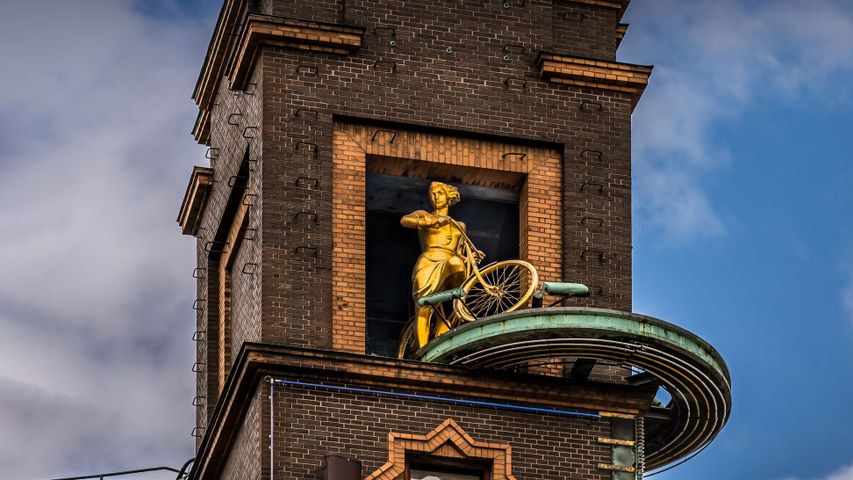 Presiding over City Hall Square on the Richshuset building in Copenhagen, 'The Weather Girls' sculpture will help launch this year's Tour de France. The race will see riders in Stage 1 today cycling past iconic landmarks of the Danish capital like Tivoli Gardens and the Little Mermaid statue. From here, the racers will ride through other parts of Denmark, Belgium, Switzerland, and of course France before ending with the final stage on the Champs-Élysées in Paris on July 24.

Copenhagen seems a fitting starting point for the world's most famous bike race, since it's so well known for being heavily invested in cycling for transportation, healthy living, and a commitment to green energy. That love affair with bikes is reflected in the cyclist figure of today's homepage image. Created by painter-turned-sculptor Einar Utzon-Frank in 1936, 'The Weather Girls' used to provide a quick forecast for folks on the square. Situated atop a rotating disc, the girl on the bike that we see here would spin out if fair weather was in the forecast. But if rain was expected, she would emerge with an umbrella.

The sculpture is no longer functional as a barometer, but the cycling figure mirrors the Danes in general—always out biking, rain or shine. The country makes cycling as convenient and enjoyable as possible, with separate traffic lights, dedicated bike lanes, cyclist-friendly traffic laws, and thousands of miles of segregated bike paths. Even the world-class competitors in the Tour de France would appreciate that.

The Seattle Great Wheel in Seattle