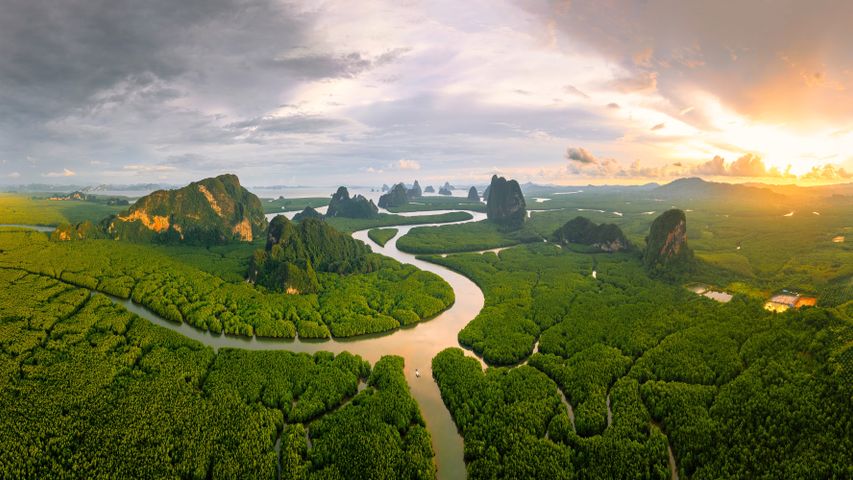 Only in the tropics do forests grow in salt water. Take this forest of mangrove trees in Phang Nga Bay in southern Thailand, one of the largest and best preserved mangrove forests in the country. Adapted to thrive in coastal marshes and swamps, mangroves can filter salt water and withstand strong coastal storms. Virtually all mangrove forests and all species of mangrove grow only in the tropical regions of the world. They are protectors of the coastlines, acting as a buffer against storms and floods.

Phang Nga Bay on the Andaman Sea is one of the most treasured and visited sites in Thailand. The south-facing bay is about 390 square kilometres in size, and contains numerous limestone islets, tower karsts, cliffs, caves and lagoons. At its opening is the tourist mecca of Phuket island. Much of the bay is protected as the Ao Phang Nga National Park, created in 1981 by royal decree. The most famous landmark in the park is probably Ko Tapu, a tall cylindrical rock that is narrower at its base than at its top. It was featured in the 1974 James Bond movie The Man with the Golden Gun. The real star of Phang Nga, however, is the mangrove. Resilient, wondrous and beautiful, mangroves are an apt metaphor for the tropics they inhabit.