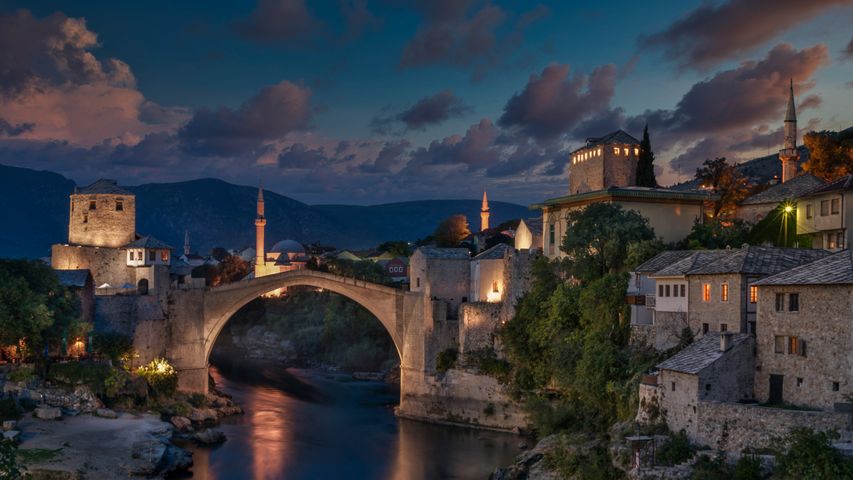 The ‘Old Bridge,’ reborn. Stari Most in Mostar, Bosnia and Herzegovina

For 427 years the Mostar Bridge in what is now known as Bosnia and Herzegovina stood strong, despite the belief that its original mortar was composed of egg whites. Truth is, not much is known about its 16th-century construction. All that remains in historical records are memories and legends and the name of the bridge’s builder, Mimar Hayruddin. He was charged by Suleiman the Magnificent to build an unprecedentedly wide arch and was threatened with death if the structure failed. Hayruddin is said to have been so unsure of his creation that he had made funeral preparations before the scaffolding was removed. Luckily (and much to the builder’s probable relief), the arch remained intact. Suspended nearly 24 metres above the Neretva River, the highest point of the bridge’s arch rises an additional 12 metres. Upon its completion in 1566, it was the widest manmade arch ever built and was compared by one explorer to ‘a rainbow arch soaring up to the skies.’

Also known as Stari Most, or ‘Old Bridge,’ it was finally brought down in November 1993 after being hit by a barrage of shells in a targeted attack during the Bosnian War. Considered a treasure of Bosnian Islamic architecture, its destruction by Croatian forces was condemned around the world. Scholars referred to the act as an attempt at ‘killing memory.’ Due to its importance in the Mostar region, plans to rebuild the bridge as accurately as possible began at the war’s end. The reconstructed bridge was unveiled to the public in 2004. Used for normal daily activities, the bridge also has history as a popular spot for annual diving competitions.