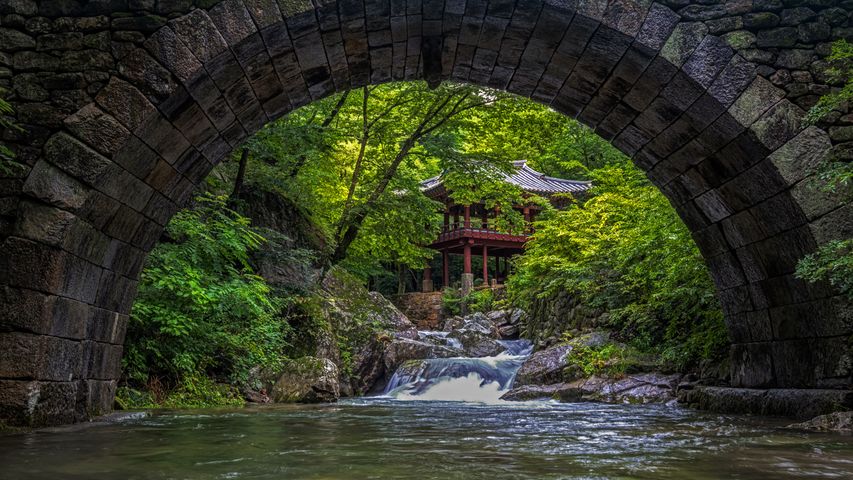 The Seonam Temple, or Seonamsa, in Jogyesan Provincial Park, South Korea, is famed for expressing calm serenity. Just downstream, Buddhist monks built this gently arched bridge by hand centuries ago. Stones around the base record the names of visitors for posterity. Called the Seungseon Bridge ('the Ascending Immortals'), it's fitting to approach the temple itself on foot, at one with nature. The site is hidden away in ancient trees, with tranquil ponds and streams, gentle hiking trails, and gorgeous pagodas. The temple still ekes out its day in the traditional way, with mellow bells and meditation. The monks also cultivate wild tea plants and are happy to share the benefits of the harvest. You are at peace as soon as you arrive at Seonamsa, and there's little to distract you from the present moment.

The original temple is believed to have been built in the 9th century, but over the years war and a major fire caused extensive damage, and it had to be rebuilt in the 19th century. Now the Seonam Temple is a UNESCO World Heritage Site, along with six other 'sansa,' or Buddhist monasteries, dotted in the mountains throughout the southern provinces of the Korean Peninsula. Visitors are invited to stay overnight at the temple and follow the monks' daily practice, but you can also dip in for a day to absorb the peace and tranquility. Flowers in spring and colorful leaf displays in fall make those the most popular times to visit.