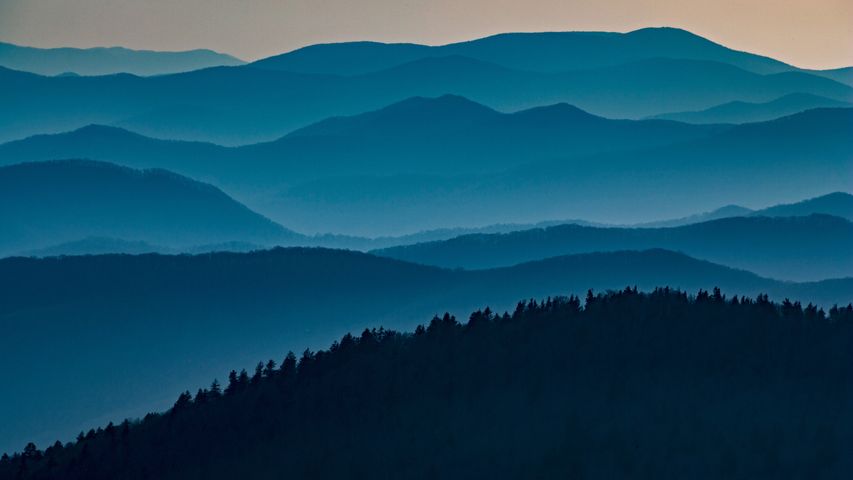 It may not be the most famous national park in the US, but the misty peaks and valleys of the Great Smoky Mountains National Park between Tennessee and North Carolina attract more than 14 million visitors per year – that’s more people than the Grand Canyon, Yellowstone and Yosemite combined.

True to its name, the park is known for its persistent haze. Native Americans – the region is the ancestral home of the Cherokee people – gave the place a name that translates to “place of the blue smoke”. The smoke is actually a fog created in part by the native vegetation. Its blueish appearance is the result of humidity and stagnant air. Almost all of the park is covered in deciduous and coniferous forest, a third of it old-growth trees that predate European settlement. The thick forests, range of elevations and abundant rainfall support a stunning variety of wildlife. Black bears, bats, foxes, skunks, otters, bobcats and 200 species of birds also call this place home. The park is most notable for its salamanders. In fact, it’s known as the Salamander Capital of the World, with 30 species living here.

But the real stars of the park are the mountains. For panoramic vistas, this vantage point – Clingman’s Dome on the Tennessee side of the park – is hard to beat. At around 2,025 metres tall, it’s also the highest point in the state. To take your own version of this picture, you don’t even have to hike. Simply drive to the parking lot. But after you’ve got your photos, keep the camera close. If the parking lot looks this good, imagine what photos you can take in the rest of the park.

Melaleuca trees in a stream after cyclonic rainfall, Western Australia