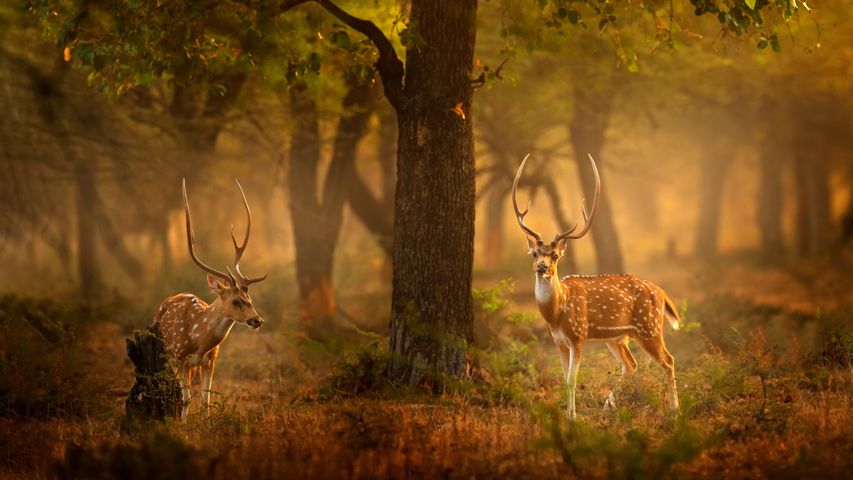 We are in Ranthambore National Park, one of the biggest and most renowned national parks in Northern India. The park is in the Sawai Madhopur district of southeastern Rajasthan, which is about 130 kilometres from Jaipur. Once one of the famous and former hunting grounds of the Maharajas of Jaipur, today the Ranthambore National Park terrain is a major wildlife tourist attraction that has drawn the attention of many wildlife photographers and lovers.

The national park is home to many mammals, reptiles and bird species. It is primarily known as the home of royal Bengal tigers, but also has a rich population of leopards, sloth bears, several deer species (like the spotted deer seen here on our homepage), marsh crocodiles, palm civets, jackals, desert foxes, serpent eagles, waterfowls and more. There are a total of 40 species of mammals, 35 species of reptiles and 320 species of birds in Ranthambore.

The spotted deer, or chital, is the most common deer species in the Indian forests. With a lifespan of about 20 to 30 years, it stands at about 90 centimetres tall and weighs about 85 kg. The deer’s golden-rufus colouring is speckled with white spots, and it has a white underbelly. Aesthetically speaking, of all the wild ungulates in our jungles, the spotted deer is perhaps the most graceful and picturesque. Well, we have no doubts!