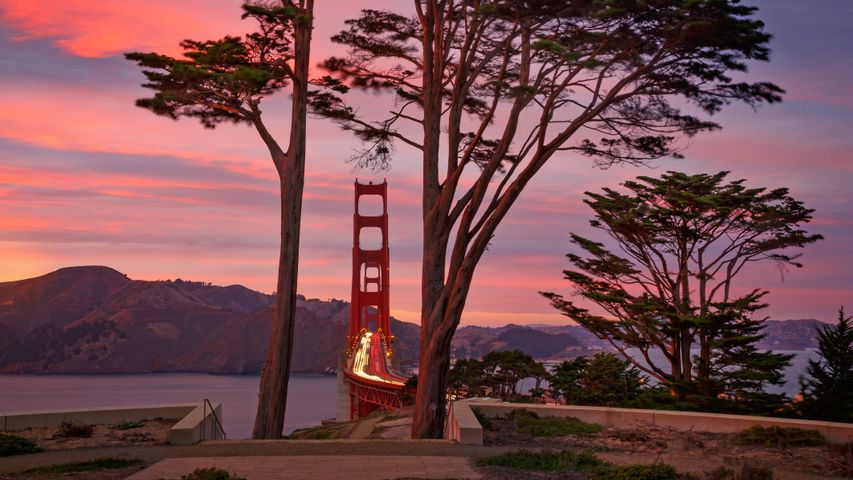 Few structures achieve the status of the Golden Gate Bridge—so recognizable that it needs no introduction. Opened on this day in 1937, the bridge was a marvel of engineering, built to withstand ferocious winds above and swirling currents below. Its construction was embraced by the local population because it would finally connect the rising metropolis of San Francisco to communities in Marin County and all that lay north. Before the bridge was completed, a ferry was the only way across the Golden Gate, the mile-wide strait that connects the Pacific Ocean to San Francisco Bay. Building a bridge to cross the span would be no small feat, and many thought it impossible.

Financing for the construction was another hurtle and was put further at risk with the Great Crash of 1929. But eventually voters in the Bay Area supported a bond measure worth $44 million ($603 million today), using their homes, farms, and business properties as collateral—the infusion of cash allowed construction to begin in 1933. In the midst of the Great Depression, the bridge became a jobs generator, putting 2,000 men to work. In four years, they completed the engineering triumph ahead of schedule and under budget.

Its two towers rise to 230 metres above the water, and the span suspended between them is 1,280 metres long, which made it the longest suspension bridge in the world upon its completion. Seventeen longer suspension bridges have since been built (most of them in China), but the Golden Gate remains the star among them, considered the most beautiful, most photographed, a symbol of American style and ingenuity, and a calling card for a city. There are few better reasons to leave your heart in San Francisco.