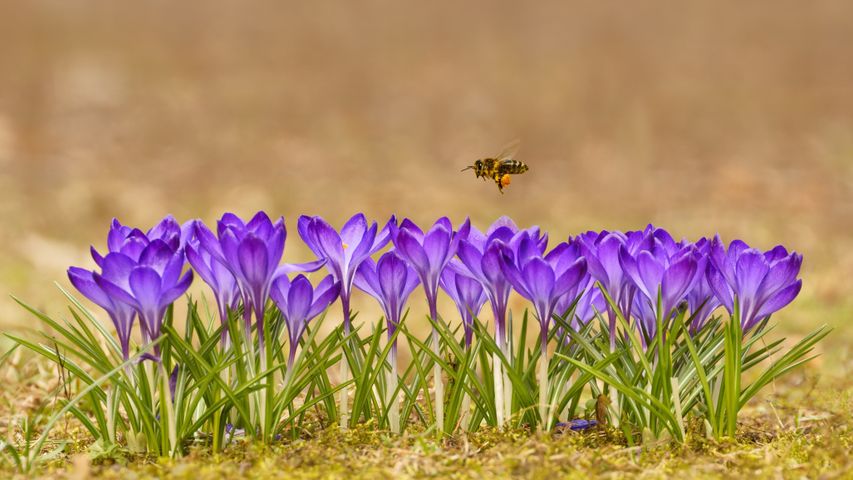 Something to ‘bee’ thankful for. World Bee Day

It’s World Bee Day, and we’re doffing our caps in thanks to the world’s lesser known ‘essential workers.’ According to the U.N., three out of four crops across the globe producing fruits or seeds for use as human food depend, at least in part, on bees and other pollinators. And tens of thousands of flowering plants, like the crocuses in today’s photo, would not exist if it weren’t for the little buzzers. A quote often misattributed to Albert Einstein suggests humans would have only four years left to live if the bees go extinct. No matter who said it, the message is clear: Our livelihood is intimately tied to the livelihood of bees. And that connection is of critical importance now, as bee colonies continue to struggle after more than 20 years of mass die-offs, a phenomenon known as colony collapse disorder.

The good thing is that many people are actively working to reverse this trend. The hobby of beekeeping has skyrocketed in recent years, even in urban areas. Bees suffer in some rural agricultural areas where the wildflowers they depend on have largely disappeared due to monoculture farming practices. Excessive pesticide use on farms is also harming bee populations. So, ironically, perhaps, urban areas have greater plant diversity and lower pesticide levels, which makes cities often better habitats for beekeeping. ‘City bees’ are now said to be healthier and produce better honey than bees raised in farming areas.

In Slovenia, the country responsible for the World Bee Day initiative, beekeeping is a way of life. One out of every 200 people is a beekeeper, most of them amateurs. The Beekeeping Academy of Slovenia says the hobby teaches ‘responsibility, perseverance, modesty, hard work, love of nature and homeland.’ Plus, they get that honey. Now that’s something to buzz about.

Moss-covered trees and ferns in a rainforest along Nile Creek, near Campbell River, B.C.