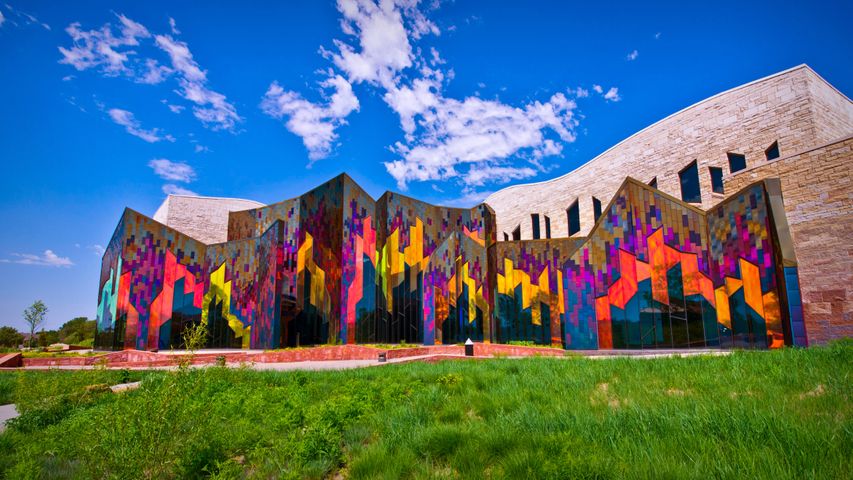 This building sets the prairie on fire. International Museum Day

To mark International Museum Day, we're featuring a destination that hasn't (yet!) achieved the fame of the Louvre or the Getty or the Met, although it's as unmistakable in appearance as any of them. This relatively small wonder proves that inspiration can be found in many places, including a suburb of Kansas City. At 42,000 square feet, the Museum at Prairiefire in Overland Park, Kansas, is about 1/50th the size of the American Museum of Natural History in New York, with which it has a partnership. But to those who find beauty and truth behind its walls, Prairiefire is no less enriching.

International Museum Day was created by the International Council of Museums in 1977 to create awareness that 'museums are an important means of cultural exchange, enrichment of cultures and development of mutual understanding, cooperation and peace among peoples.' It's observed annually on or around May 18 by more than 37,000 museums in 158 countries and territories. Each year is assigned a different theme. This year's theme is 'The Power of Museums,' to innovate and build community.

The Museum at Prairiefire, which opened in May 2014, is devoted primarily to natural history. It borrows displays from larger museums and hosts at least two major traveling exhibits per year. Its striking glass exterior, featured here, was designed to reference the intentional prairie fires that were an integral part of farming life in Kansas. The glass is dichroic, which means that its color changes with the light of the day. The museum is itself a work of art.