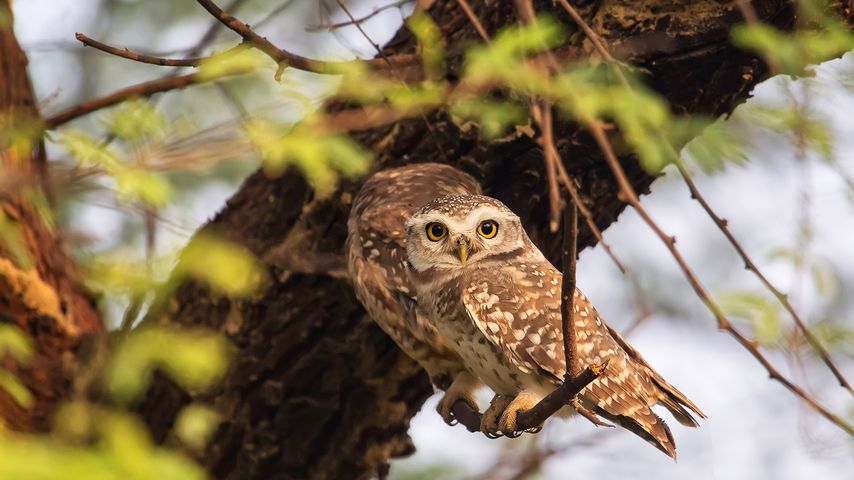 You are seeing the Spotted owlets in the Keoladeo National Park, formerly known as the Bharatpur Bird Sanctuary, in Rajasthan, India. The national park has become a famous avifauna sanctuary with thousands of rare and highly endangered birds. Over 230 species of birds have made this place their home. A major centre for ornithologists, scores arrive every hibernal season. Declared a protected sanctuary in 1971, UNESCO designated the park a World Heritage Site in 1985.

The Spotted owlet, which breeds in tropical Asia from India to Southeast Asia, belongs to the larger grouping of owls, known as typical owls, Strigidae, which contains most species of owl. The barn owls, Tytonidae, comprise the other grouping. It has a small (21cm) and stocky body, its upper parts grey-brown while heavily spotted with white. The owl has white underparts, streaked with brown. The Spotted owlet has a pale facial disc, yellow eyes, and a white neckband. Male and female appear similar, with deeply undulating flight.

Normally nocturnal, the species has been sighted during the day. Small birds often locate the owls, mobbing them while perched in trees. It hunts a variety of insects and small vertebrates. They have a harsh chirurr-chirurr-chirurr call.