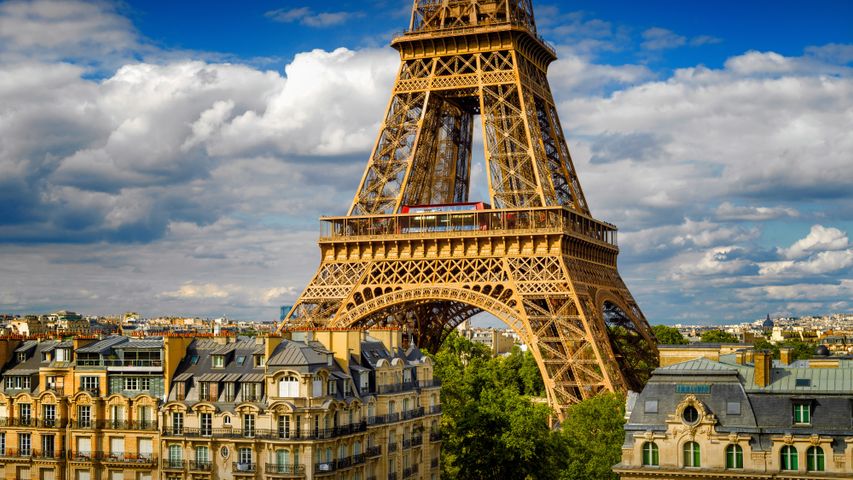 Celebrate another year with The Iron Lady. Eiffel Tower, France

Locally, it’s called ‘La dame de fer,’ which translates to English as 'The Iron Lady.' To the rest of the world, it's the Eiffel Tower, a landmark nearly synonymous with all things Parisian. It’s one of the most recognizable structures in the world and the most visited monument with an entrance fee. The Eiffel Tower took 500 workers two years, two months and five days to complete. It stands 324 metres tall, an amazing achievement for a time when structures of this size were unheard of. For that, we’re joining the world in celebrating the Tower's 133rd birthday.

Depending on the temperature, the Eiffel Tower can actually shrink by about seven inches. On a particularly windy day, if you look closely, maybe you’ll notice the natural swaying movement near the top. That wind also gets collected by turbines on the second level which convert it into electricity for the tower’s shops and restaurants. There’s also a rainwater collection system that's used for the toilet tanks. The Eiffel Tower gets a fresh paint job roughly every seven years. Originally it was dark red, then yellow, but has been ‘Eiffel Tower Brown’ for the past 54 years. It takes around 16,000 gallons of paint to get the job done.

At the Kistefos Museum's sculpture park in Norway, The Twist bridges the Randselva River via a multipurpose walkway