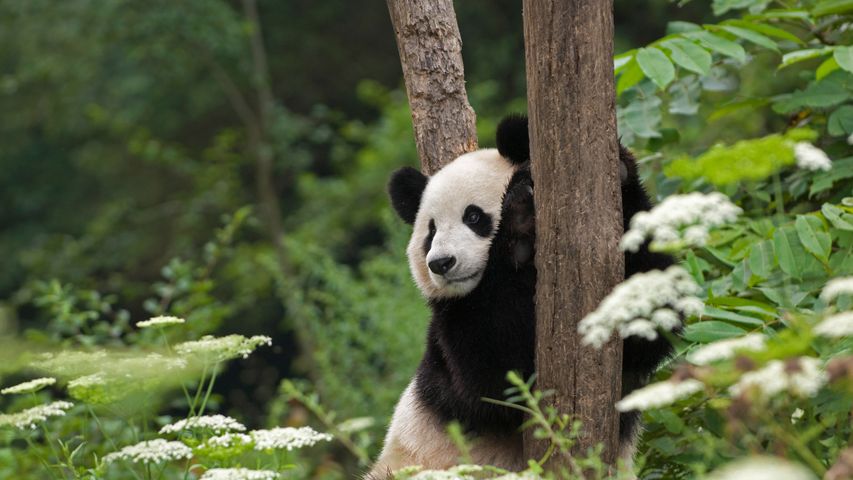 There’s just something comforting about giant pandas. They're stoic but look cuddly, and their unusual black and white markings make them distinctive. Pandas are one of the animals we recognize from an early age. But while we may take them for granted, they've been under threat from shrinking habitats and food supply as people harvest bamboo and build roads and train tracks through their forests.

There are currently about 1,800 giant pandas living in their native habitat of central China and another 600 or so in zoos. These figures represent a slight increase in population counts of the early 2000s, perhaps a result of dedicated conservation efforts. With the rise in numbers, the International Union for Conservation of Nature reclassified the giant panda in 2016 from 'endangered' to ‘vulnerable.’

This giant panda is scratching a tree to mark its territory in the Wolong National Nature Reserve in China's Sichuan province, which has implemented strict conservation measures to protect pandas. Soon, no doubt, this one will scout out some tasty bamboo shoots. Bamboo makes up 99 percent of a panda’s diet, and an adult bear must consume more than 30 pounds (some manage 80!) of the woody grass each day to meet its dietary needs. While that sounds like a hefty amount, giant pandas digest only 17 percent of that bamboo. Since eating occupies about 14 of its waking hours, the giant panda has a couple of physiological tools to help: The bone at the base of its paw works as a modified thumb so it can get a firm grip on the bamboo, and its molars are very broad and flat to crush the bamboo shoots, leaves, and stems.