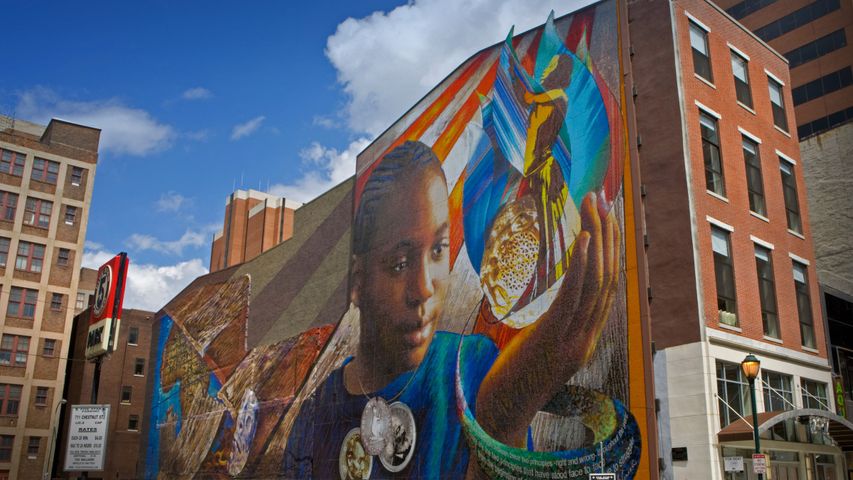 A beautiful day in the neighborhood…. 'Legacy' mural in Philadelphia

As Black History Month winds down, we've come to the City of Brotherly Love—Philadelphia—to admire this stunning mural, 'Legacy,' painted by Josh Sarantitis and Eric Okdeh. Measuring nearly 10,000 square feet, the mural in Philadelphia's Central City District explores the work of Abraham Lincoln and Frederick Douglass to end slavery. Students and staff at five public schools, together with dozens of other individuals, collaborated to produce the artwork, hand-laying over 1 million small glass titles on the mural’s right side. The main figure is a girl holding a medallion surrounded by blue flames. The girl's middle-aged self rises out of these flames, a symbol of defiance and freedom.

What began in the mid-1980s as an anti-graffiti effort became a city-changing artistic movement that has been called the world's largest outdoor art gallery. Artist Jane Golden and anti-graffiti activist Tim Spencer started the Mural Arts Program (now Mural Arts Philadelphia) with the goal of channeling the talents of graffiti artists into city beautification. Graffiti taggers were given the option of either going to jail or participating in the new initiative. Easy choice! Today the program employs over 300 artists and has produced more than 4,000 paintings on the city's buildings, around 2,000 of which are still viewable today.