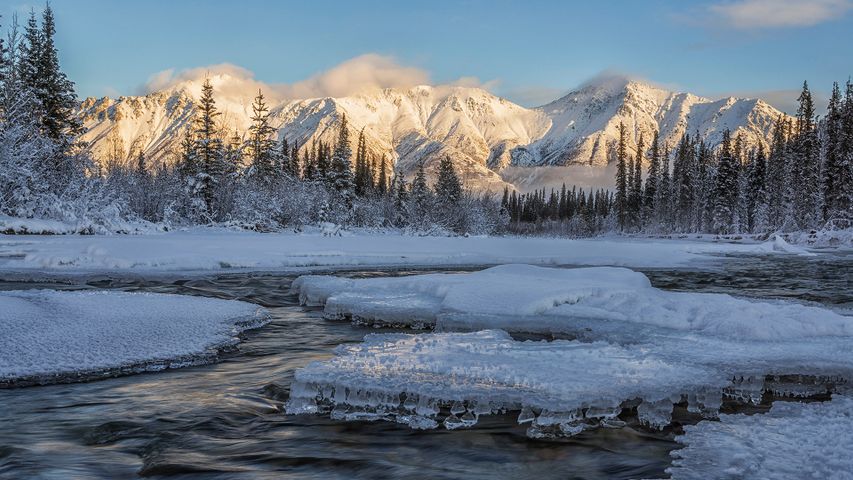 Sunset over the Wheaton River as the light hits Grey Ridge near Whitehorse, Yukon

Welcome to the Yukon, one of Canada’s three territories that offers magnificent mountains, numerous species of wildlife and an all-encompassing nature retreat. Out here, winters span at least five months and temperatures can plunge as low as -40°C. With a sparse population, the Yukon boasts massive natural landmarks. It is home to Canada’s tallest mountain – Mount Logan, the country’s largest non-polar icefields, and the fierce Yukon River which runs more than 3,000 kilometres. The Yukon also has a thriving population of wildlife consisting of moose, black bears, wolves, caribou, and Dall sheep to name a few.

This Canadian territory’s dark and long winters make it an ideal destination for spotting nature’s dazzling light show – the aurora borealis. In addition to that, visitors can partake in various seasonal activities ranging from slow and tranquil to fast and exhilarating. What better way to explore the Yukon than going dogsledding with a pack of huskies? If you’re looking for a full body workout, there’s skiing and snowshoeing to maneuver through the snowy trails across the wintery landscape. And if you’d rather lounge by the frozen lakes, you can drill a hole and try your hand at ice fishing. There’s something for everyone, here in the Yukon. For now, we’ll just take in the grandeur of this Canadian destination from today’s homepage image.