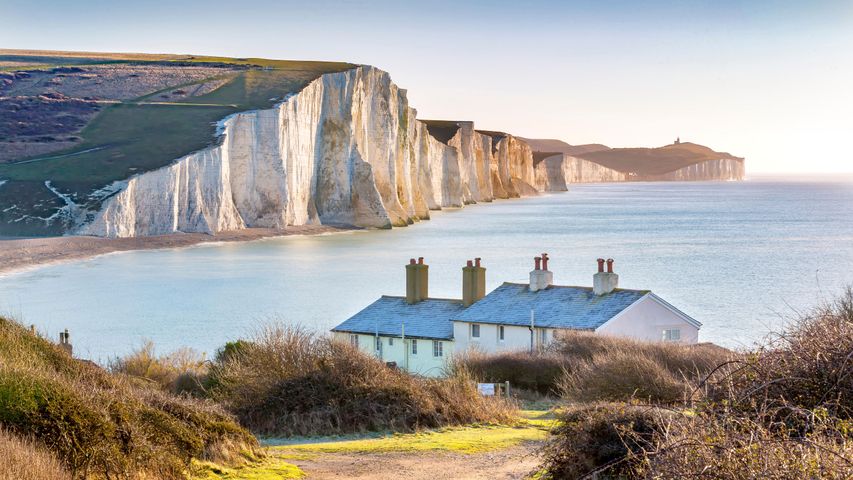 This stunning view of the Seven Sisters cliffs in East Sussex won’t be around forever. While sea defences have been built elsewhere along south-east England’s coastline, this stretch of the Sussex Heritage Coast slips away by an estimated 30 to 40cm every year. Those sheer cliffs are created when large chunks of chalk fall away, leaving behind vertical faces. The sea plays a big part, but rainwater too seeps into the chalk layers, cracking them from within as it freezes. The constant peeling away keeps the cliff face sparkling white which, combined with the unspoilt coastline, makes the Seven Sisters a popular backdrop in films, from Atonement and Harry Potter to Robin Hood, Prince of Thieves.

Those iconic cottages in the foreground are also precariously perched. Built shortly after the national coastguard service was created in 1822, when Cuckmere Haven was a smuggling hot spot, for 200 years they have watched over the bay for smugglers, boats in trouble and, during two world wars, invaders. But since they were built, the cliff face in front of them is estimated to have retreated by 30 metres. Despite a sea wall built after World War Two and various additions since, the land on which they stand is slowly disappearing. The cottage owners continue to campaign for defences to protect their homes and the iconic view they frame.