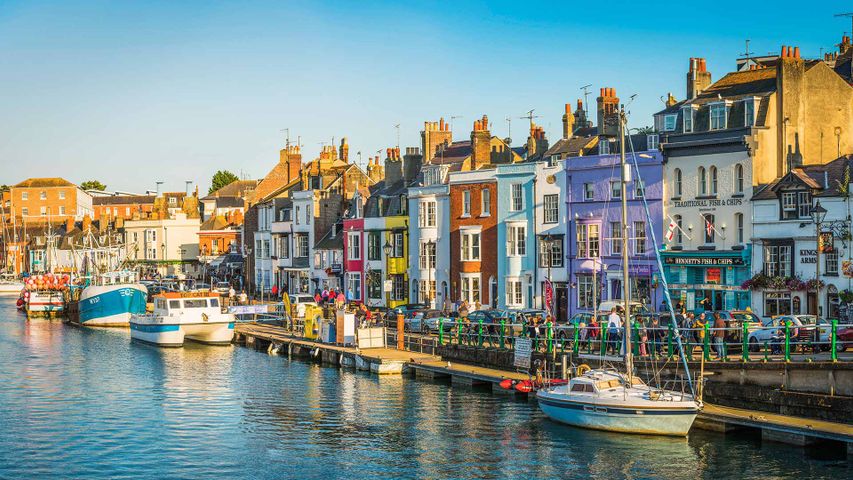 One of England’s first seaside resorts, Weymouth’s historic harbour and Georgian seafront have been attracting visitors for over 200 years. Tourists and locals can watch the world go by while enjoying some fresh seafood in the harbour, or pull up a deckchair on its picturesque beach and take in a Punch and Judy show, all while soaking up one of the UK’s sunniest climates.

Ships have been passing through this part of Dorset for centuries. In medieval times, there were two seaports here, Weymouth and Melcombe Regis, which shared the harbour (uneasily). The rivals were brought together as one borough in 1571 and a bridge was built to unite them across the harbour. Five more have been built since then; the current bridge, which opens to allow ships to pass through, dates back to 1930.

Weymouth has navigated its way through some explosive episodes throughout history. Six ships sailed from here to take on the Spanish Armada in 1588 and evidence of Civil War skirmishes in the 1640s can be seen in the cannonball still embedded in a house in Maiden Street. It also had a part to play in World War Two, as the departure point for the Normandy Landings. It has been a seaside resort since Georgian times, first visited by George III himself in 1789. Like many other British seaside resorts, its popularity has waned since its heyday, but its beach, harbour and views across the Jurassic Coast continue to ensure a steady stream of summer visitors.