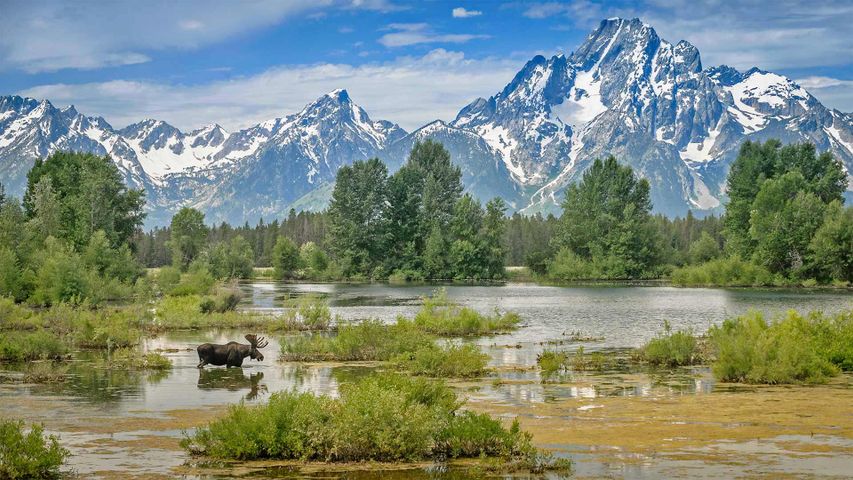 If this beautiful view of Wyoming’s Grand Teton National Park seems as pretty as a painting, there may be a reason for it. That majestic peak towering over the landscape is Mount Moran, named for Thomas Moran, an American artist of New York's Hudson River School who earned fame by painting scenes of the western frontier. In 1871, Moran and photographer William Henry Jackson were invited on an expedition to the Yellowstone region to accompany a team from the US Geological Society while they conducted the first comprehensive survey of the area. Moran's paintings and Jackson's photographs from the trip immediately captured the public's attention and inspired the government to establish Yellowstone as the first national park in the U.S. in 1872.

For the next two decades, Moran painted hundreds of landscapes of the Yellowstone region, producing indelible images of this spectacular wilderness that would come to define the American West in the imaginations of many. The area had such an impact on Moran that he adopted the signature T-Y-M, Thomas 'Yellowstone' Moran. He returned to the area in August 1879 on an expedition to the Teton range, just south of Yellowstone National Park. He never made it as far into the mountains as he'd hoped, but gazing up at the towering peaks, he wrote in his diary, 'From this point it is perhaps the finest pictorial range in the United States or even N. America.' Judging from this image, it's hard to argue with him.