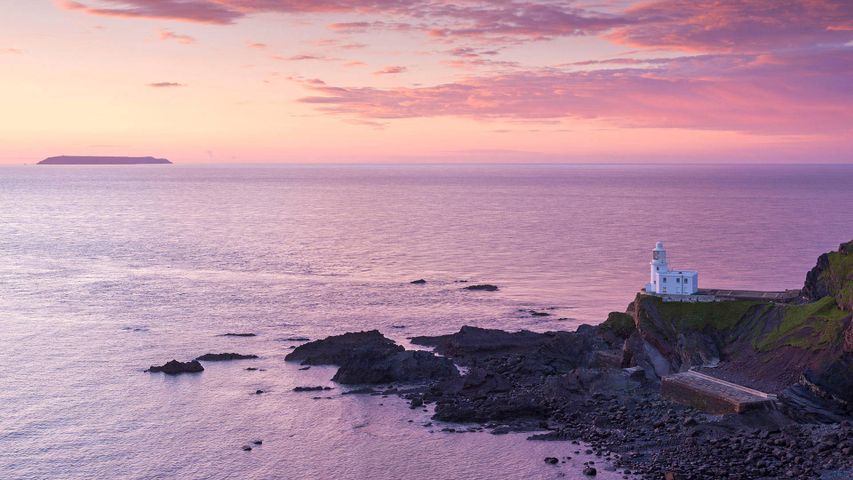 All may look calm in this sunset scene but here at the north-west tip of Devon’s coast, the Atlantic Ocean meets the Bristol Channel - and these waters can be treacherous. The fierce currents in these parts saw the Romans name Hartland Point the ‘promontory of Hercules’ and the rocky cliffs and secluded coves around here have sent many ships to their doom. From the coastal path, walkers can still spot the remains of cargo ship Johanna, which ran aground on New Year’s Eve in 1982.

The lighthouse itself, which opened in 1874, stands 120ft (37m) above sea level and its light can be seen up to 25 miles away. Sitting just out of shot behind it is Hartland Point, a towering 325ft (99m) rocky outcrop. Sections of rock behind the lighthouse were broken off and allowed to fall to the beach to try to protect it from the waves. But they were repeatedly washed away, leaving the lighthouse teetering on the edge. A permanent sea wall was built in 1925.

Out on the horizon to the left is the silhouette of Lundy Island, a three-mile-long granite outcrop, which has been inhabited for at least 3,000 years. It is home to lots of wildlife, including colonies of puffins and Manx Shearwaters on its rugged west coast and is said to have been named by Viking invaders - Lundy is from the Old Norse word for puffin.