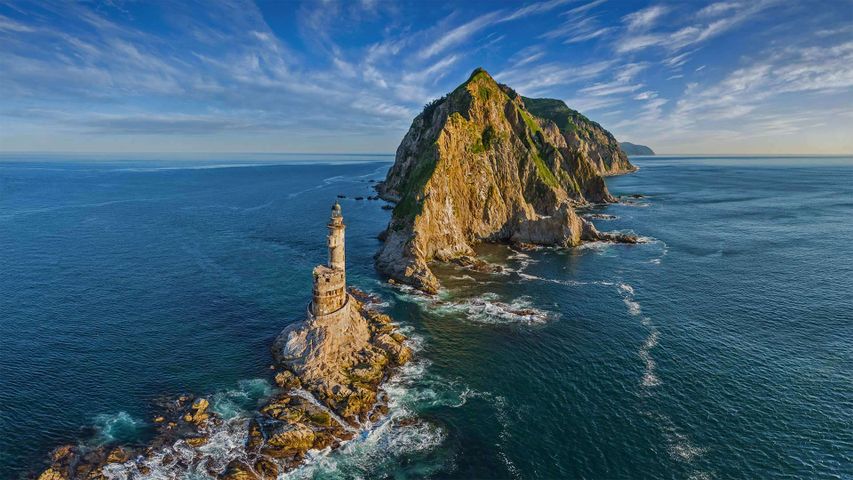 Seemingly against all odds, the Aniva Lighthouse stands atop this rocky outcrop where it once lit the way for vessels navigating the fierce currents, hidden rocks, and frequent fogs of Cape Aniva on the island of Sakhalin. Russia's largest island, Sakhalin lies off the mainland's Far East coast, due north of the Japanese island of Hokkaido. The island was hotly contested by both Russia and Japan in the 19th and early 20th centuries. In the late 1930s, when the Aniva Lighthouse was built, Russia controlled the northern half of Sakhalin while Japan controlled this, the southern part — so it was a team from Japan that built this lighthouse.

Construction was a staggeringly complex endeavour on this tiny rock amid the turbulent seas of the Northern Pacific. But beginning in June 1937, the engineers and workers managed to overcome innumerable obstacles, and by October 1939 they had completed this 9-storey, 100-foot tower. Lightkeepers braved harsh weather, but the lighthouse itself was relatively comfortable. Aside from a kitchen, radio room, and equipment room, the living quarters were spread across three floors and could accommodate up to 12 people. The lightkeepers left in the 1990s after Aniva Lighthouse became fully automated, powered by a nuclear system. But when that power source was depleted in 2006, the lighthouse was abandoned, and now it's being slowly reclaimed by nature.