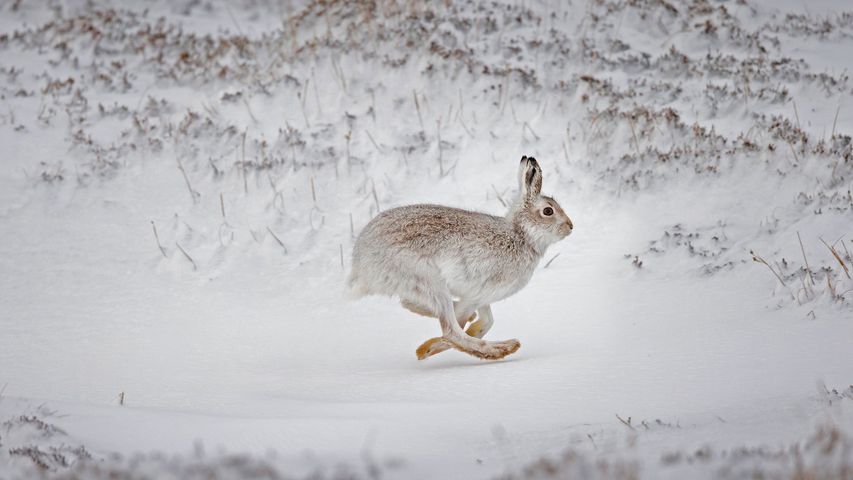 Blink, and you'll miss it

The mountain hare is doubly hard to catch sight of because, along with its tremendous speed, it's terrifically well camouflaged. These two traits help this iconic species survive in the rugged mountains and uplands of northern Europe and Asia—this one is dashing across a heath in the Scottish Highlands. When they have to, these speedy leporids can dart away as fast as 80 kmph, at least for short distances, allowing them to outrun predators and disappear safely into the heather. But a would-be predator may not even spy them to begin with—mountain hares change coats, or molt, several times a year, their fur going from brown and grey in summer, to white-grey in winter, helping them hide more easily in the snow.

Unlike their rabbit cousins, hares don't burrow underground or sleep communally in warrens, but instead live and rest above ground in small nest-like depressions called forms. Hares are born fully formed, with fur grown out and eyes wide open, on the lookout for danger. When the spring breeding season arrives, the normally placid hares also undergo a drastic change in personality, from shy and docile creatures, to frenzied, lovestruck animals on the hunt for mates. Male hares sometimes even 'box' each other as they battle for dominance and attention, striking rivals with their forepaws. Even the females have been known to do a little boxing, although that's usually just to fend off overly aggressive male suitors. These antics have become so famous, they are said to have inspired the idiom, 'mad as a March hare.'

Macrophotograph of a migrant hawker dragonfly