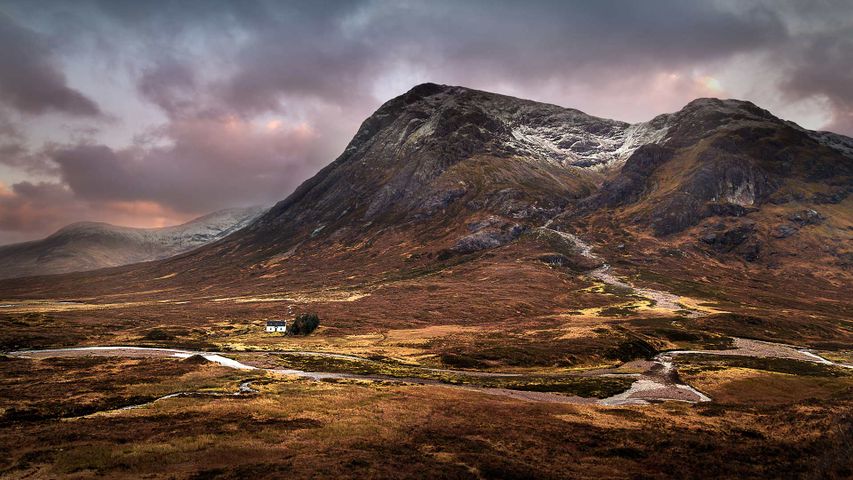 Icon of the Highlands. At the foot of Buachaille Etive Mòr

This desolate scene shows one view of the great Buachaille Etive Mòr, one of Scotland’s most iconic mountains, situated between the valleys of Glen Etive and Glen Coe in the Highlands. A ridge nearly five miles long, it is made up of four main peaks, the highest of which is the pyramid-shaped and much-photographed Stob Dearg, at 3,350ft (1,021m). If you’re wondering about that name, Buachaille Etive Mòr it is derived from the Scottish Gaelic for “the great herdsman of Etive”. Its sister mountain, Buachaille Etive Beag to the west, is known as the small herdsman.

Who lives in that lonely little cottage, the only building in sight here on the north side of the mountain? Actually it’s the Lagangarbh hut, which has been run by the Scottish Mountaineering Club since 1946. It is currently closed but, in normal times, it provides accommodation for passing climbers hoping to tackle that epic backdrop.

This wilderness is situated within the wider Lochaber Geopark, home to some of the UK’s highest mountains, deepest lochs as well as rivers, beaches, coasts and cliffs. This varied terrain is the product of millions of years of mountain building resulting from continental collisions, explosive periods of volcanic activity and carving by glaciers. And it’s not just the dramatic Highlands scenery which marks it out as an area of international importance. It is also home to rare plants, particularly Alpine species, and a wide variety of wildlife from golden eagles to pine martens.