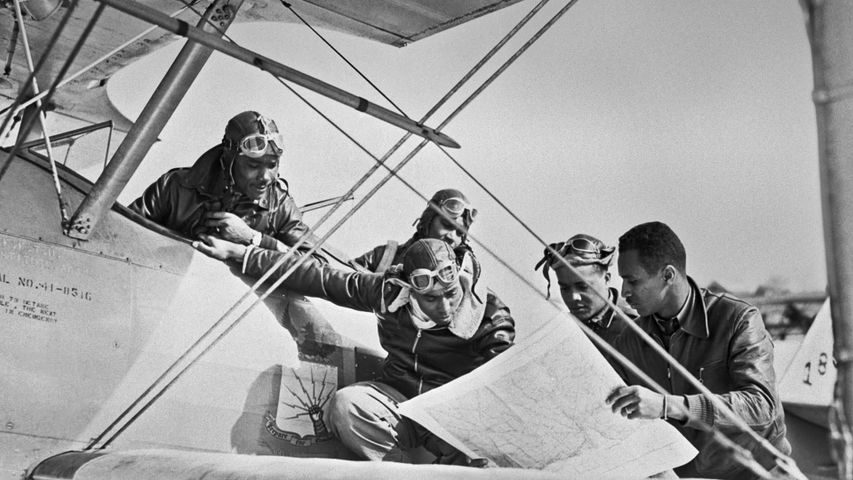 In this photograph, likely taken in 1941, we see a group of cadets examining a map with their training instructor. They are (from left to right) Lieutenant John Daniels of Chicago, Cadet Clayborne Lockett of Los Angeles, Cadet Lawrence O'Clark of Chicago, Cadet William Melton of Los Angeles, and civilian instructor Milton Crenshaw of Little Rock. The pilots would later be known as the 'Tuskegee Airmen,' the first Black military aviators in the US Army Air Corps, a precursor of the US Air Force. During World War II, more than 1,000 Tuskegee pilots flew more than 15,000 individual sorties in Europe and North Africa, quickly becoming revered for their bravery and excellence.

Leading up to, and during the war, Black Americans in parts of the US were subjected to discriminatory Jim Crow laws, and the US armed forces were also officially segregated by race. Still, these pilots and thousands more African American navigators, bombardiers, mechanics, instructors, crew chiefs, nurses, cooks, and other support personnel joined the war effort to defend their country. The heroism of Black military personnel like the Tuskegee Airmen during the war encouraged the official desegregation of the US armed forces in 1948, but some forms of racial segregation continued until after the Korean War.