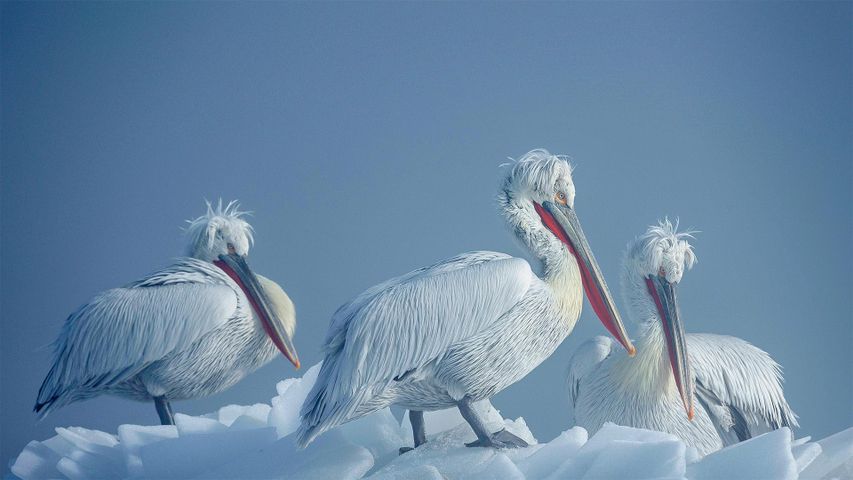 These shaggy-coiffed birds are Dalmatian pelicans, seen here in Greece’s chilly Lake Kerkini. These waterfowl are among the largest freshwater bird species in the world, with wingspans of as much as 11ft (3.4m). Dalmatian pelicans generally breed during the first four months of the year, building their nests on or near the ground, and sometimes on vegetation floating in water. While breeding, they form monogamous pairs, although they generally don't pair up for life.

Once breeding season is over, these social birds are nomadic, flying anywhere from Eastern Europe to Central Asia, Russia and to the Indian subcontinent. They travel in search of food, hunting mostly fish and small amphibians. Dalmatians are strong swimmers and flyers, and are said to be meticulous groomers, spending a lot of time preening and splash-bathing themselves between migrations. Unfortunately, because of poaching and shrinking natural habitats, these beautiful birds are endangered, with only an estimated 10,000 to 20,000 remaining worldwide. They roamed Britain thousands of years ago but disappeared due to hunting and the draining of their wetland habitats. Some believe they could be reintroduced here, if wetlands are restored under re-wilding plans.