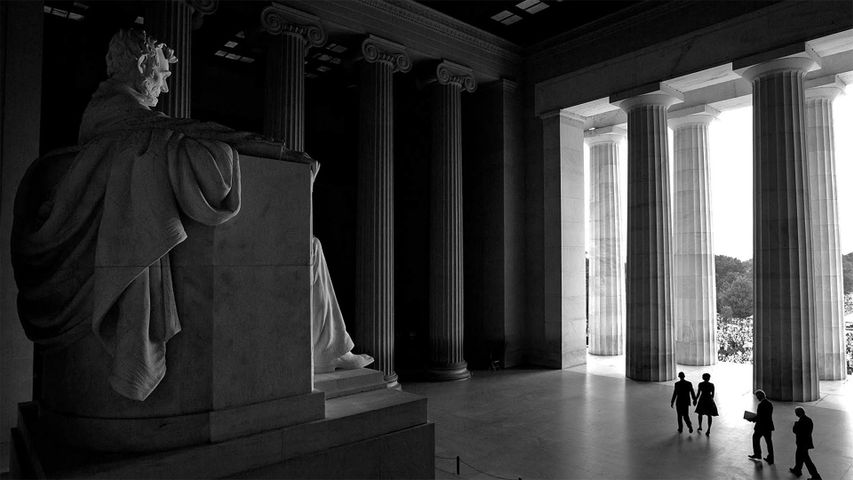 Presidents hear the echo of history

On this Presidents' Day, we're stepping back in time and behind the scenes at the Lincoln Memorial in Washington, DC. In this photograph, taken August 28, 2013, the giant marble statue of President Abraham Lincoln seems to be looking on approvingly as then-President Barack Obama, first lady Michelle Obama, and former Presidents Bill Clinton and Jimmy Carter walk to the stage for a celebration marking the 50th anniversary of the historic 1963 March on Washington for Jobs and Freedom. It was during that march, of course, when civil rights leader Martin Luther King Jr. delivered his famous 'I Have a Dream' speech from the steps of this memorial.

The hundreds of thousands gathered that day in 1963, and the millions who watched on television or listened on the radio, were so moved by King's passionate call for an end to racism that the civil rights movement gained a much wider following, putting pressure on President John F. Kennedy's administration to support new civil rights legislation. And the words spoken by King and others, together with the chants of so many marchers, continue to reverberate across the capital and the nation, inspiring Americans, including American presidents, to continue dreaming for a better and more just future.

Humpback whale feeding on herring off the coast of Kvaløya, an island in Northern Norway

Bronze statue of George Washington in the Capitol rotunda in Washington, DC