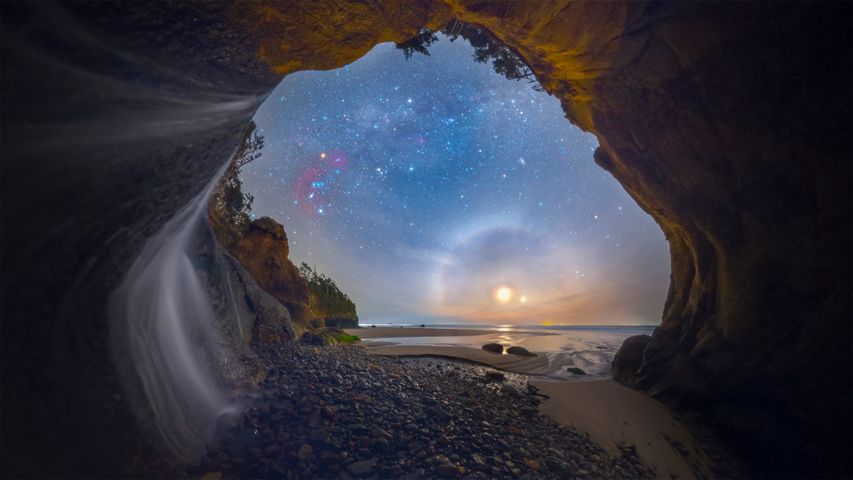 Why is this night sky so busy?

When the sky is clear, and the moon hangs low in the horizon, you can sometimes spot a halo around it, like the one captured in this image from Hug Point Falls on the coast of the US state of Oregon. And sometimes within that halo, you may also see a bright spot that appears to be a second moon. No, it's not the moon's long-lost twin, but an optical phenomenon called a paraselene, more commonly referred to as a moon dog or mock moon. This 'false' moon can appear when the real moon is at least a quarter visible and is bright enough for its light to refract off hexagonal-plate-shaped ice crystals floating in the atmosphere. Moon dogs are more commonly seen during the region’s winter months, when the ice crystals are more prevalent in the clouds.

The moon dog is the lunar equivalent of a sun dog, also known as a parhelion, and both appear as part of a related optical phenomenon called a 22-degree halo. Halos like these are also caused by crystal refraction in the atmosphere, and named for their apparent radius of 22 degrees, or about 10 diameters outside the moon and sun. A 22-degree halo is said to be visible up to 100 times per year, much more common than a rainbow.