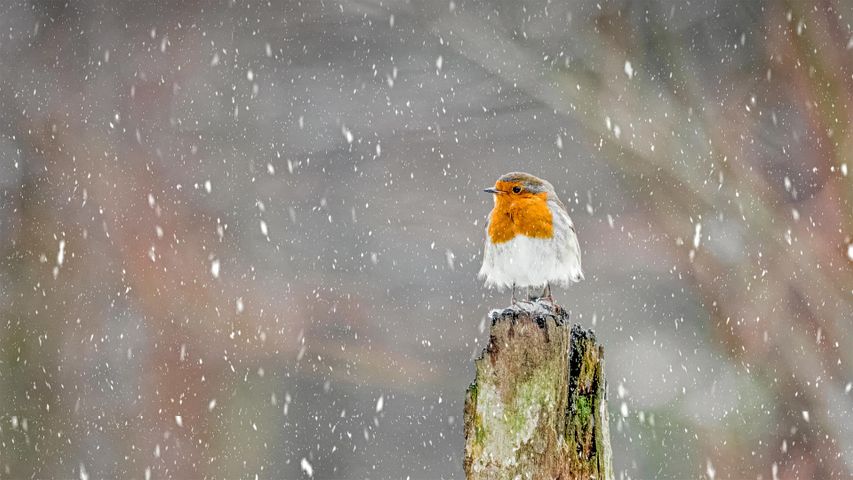 So, how long 'til springtime?

Winter often brings cold and snow to the uplands of England's Peak District National Park, as this wee European robin surely knows. Here we see it puffing up its plumage to insulate its body against the wintry weather. The European robin is commonly known in the British Isles as the robin redbreast. But it's more orange than red, you say? That's because when British people first named it the redbreast, probably in the 1400s, the word 'orange' had not yet been introduced as a colour name in the English language. Animals and other things were often named 'red' even when orange or tawny: the red deer, Red Planet, and robin redbreast are all examples. Whatever you decide to call our diminutive friend, we appreciate its bright splash of colour on an otherwise bleak wintry day.

This weekend, around half a million people in the U.K. are expected to take part in the Big Garden Birdwatch, and it's likely that many will spy European robins, which are widely distributed across the British Isles. One of the world's largest wildlife surveys, the Big Garden Birdwatch has been sponsored by the Royal Society for the Protection of Birds (RSPB) for over 40 years. Participants spend just one hour in a garden, local park, or even on an apartment balcony and count the number of each bird species that land there at any one time. By comparing data trends over the years, the RSPB can monitor the health of bird populations and better understand the challenges faced by wildlife.