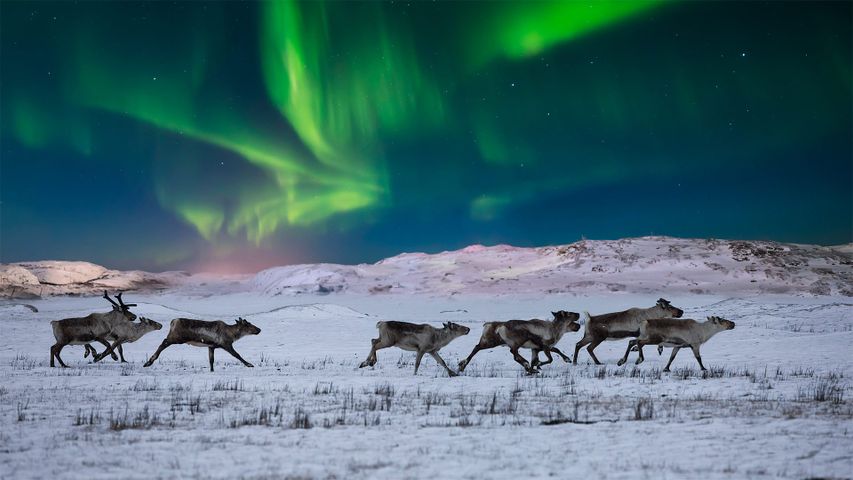 Known in North America as caribou, reindeer are built to live in freezing Arctic regions like northern Norway, where this herd was photographed under the transfixing swirl of the aurora borealis, or northern lights. Reindeer have evolved unique features that help them thrive in these harsh environments. Their noses are adapted to warm the air they breathe before it enters their lungs, which helps maintain a steady body temperature even in the coldest of weather. And most of their bodies, including their hooves, are covered with thick, dense fur to keep them well insulated. In fact, they are more likely to overheat then freeze—so when they're flying through the starry skies tonight, they'll be feeling snugger than Santa Claus in his red velvet suit.

Reindeer were introduced to Christmas lore in 1823 with the poem 'A Visit from St. Nicholas,' also known as 'The Night Before Christmas.' Written by Clement Clarke Moore, the verses paint a picture of a Santa Claus and his sleigh, driven by eight flying reindeer—Dasher, Dancer, Prancer, Vixen, Comet, Cupid, Donner, and Blitzen. In 1939, Rudolph was added to Santa's squad when Robert L. May created a story about the red-nosed misfit for his employer, Montgomery Ward, as part of a Christmas promotion for the department store.

The famous reindeer are often referred to as males in pop culture (except, maybe, Vixen?), but as the animals are typically depicted with their antlers intact, it is more likely the seasonal sleigh-pullers are female. This is because male reindeer shed their antlers at the end of the mating season in early December, while females sport their thinner antlers throughout the winter. (Castrated males follow an antler cycle that's similar to female reindeer, but we don’t think Santa would go to those lengths...)

Holiday tree at Weissensee, a small lake near Ehrwald in Tyrol, Austria