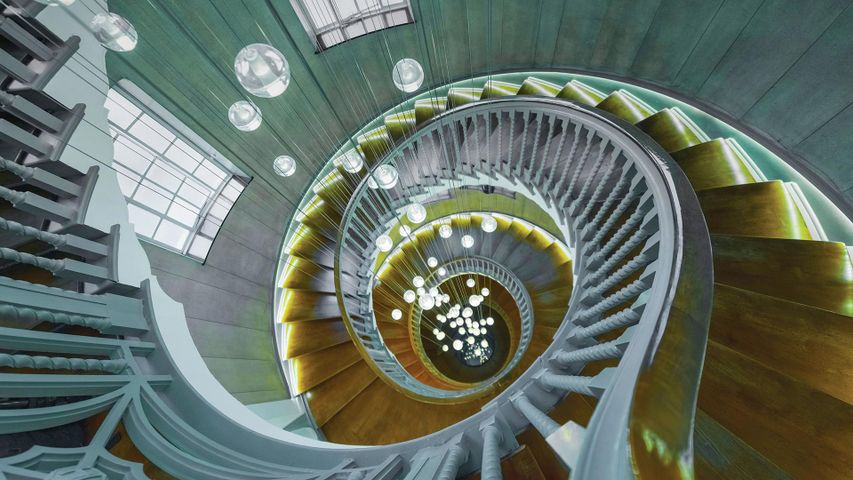 Spiralling down through three floors at Heal’s department store in London is this striking Cecil Brewer-designed staircase. Heal’s flagship store moved to Tottenham Court Road in 1833 but the staircase was a later addition in 1916, ahead of the opening of an in-store art gallery. Brewer, the architect, was the cousin of Ambrose Heal, then chairman of the family business. While the art gallery is no longer with us, this glamorous set of stairs is still helping shoppers get from A to B, in stylish fashion.

Spiral staircases have been with us for some time. Remains of an early form of spiral staircase were found at the site of one of the five temples of the ancient Greek city of Selinunte in Sicily, which was built around 480 BCE. The oldest one still standing can be seen at Trajan’s Column in Rome, built around 113 AD. Found everywhere from medieval castles to modern day museums, spiral staircases have an enduring appeal and certainly bring a sense of occasion to journeys between floors. They are also better exercise than taking the lift.

Love locks displayed on the Great Wall of China near Beijing

Stairs under Pyramid at the Louvre Museum in Paris, France

The Stoneman Bridge on the Merced River in Yosemite National Park, USA

Aerial view of Christmas lights along Regent Street in London