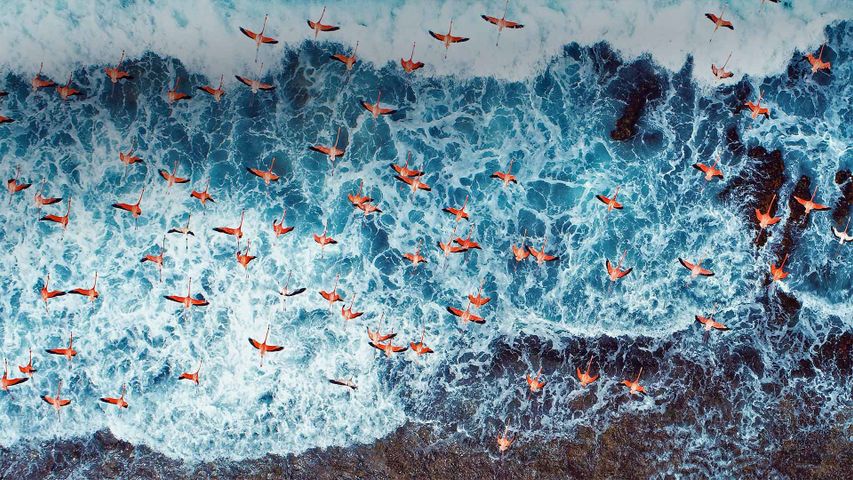 Today is World Migratory Bird Day in Latin and South America, so to honour the occasion we’ve chosen these flamingos, rising above the Caribbean Sea off the coast of Venezuela. Changes in daylight hours and food availability can trigger seasonal migrations in many bird species, including flamingos. American flamingos like these will migrate relatively short distances, usually to ensure a steady food supply.

The non-profit sponsor of World Migratory Bird Day, Environment for the Americas, focuses its efforts on conserving habitats for the hundreds of bird species that migrate along north-south routes in the Americas, from Alaska and Canada to Argentina and Chile and places in between. Most of these migratory birds use established flight paths called flyways to travel between their breeding grounds and overwintering areas. These aerial highways tend to avoid obstacles such as mountain ranges and oceans, running parallel to topographical barriers and following routes along coasts or major river valleys. Birds migrating through North America follow four main flyways, the Atlantic, Mississippi, Central, and Pacific. Because the birds need adequate food and shelter at stopover points along the way, conservation of habitats through these corridors is especially important to the birds' survival.

While October 10 is World Migratory Bird Day in Mexico, Central, and South America, every day is a good day to pick up some binoculars and watch the birdlife outside your own window no matter where you live.